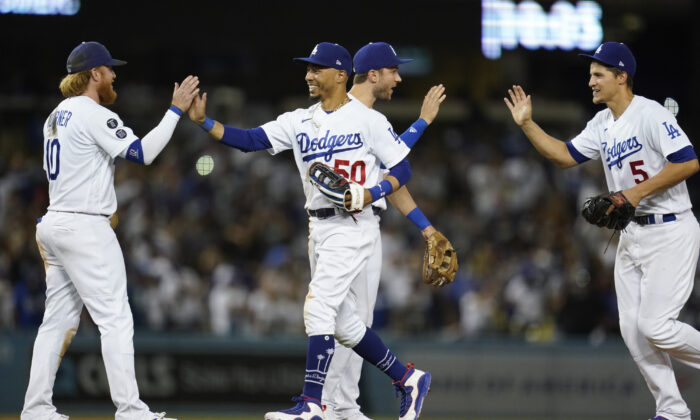 LOS ANGELES—Pitching and just enough hitting got the Dodgers back to winning.

“It was really important for us to get ahead of this series,” Urías said through a translator. “On a personal note, very great to get those victories.”

Urías (17-3) scattered three hits, struck out seven and walked one to remain unbeaten in his last 13 starts, going 8-0 in that stretch. The left-hander hasn’t lost since June 21 at San Diego.

“He’s a front-line starter and when he takes the baseball, we expect to win,” manager Dave Roberts said. “For him to go deep tonight shows his growth and maturity.”

Padres All-Star shortstop Jake Cronenworth got hit on his left hand by a pitch in the third and later left the game. Manager Jayce Tingler said Cronenworth has a small fracture on his left ring finger and will be re-evaluated over the next few days.

Kenley Jansen pitched the ninth for his 31st save.

The Dodgers remained 2 1/2 games behind NL West-leading San Francisco and improved to a major league-best 47-23 at home with their 15th shutout.

Muncy’s 32nd homer off Joe Musgrove (10-9) gave the Dodgers a 2-0 lead in the third. Mookie Betts singled for the Dodgers’ first hit of the game and scored on Muncy’s shot to right.

Musgrove gave up three runs and four hits in six innings. The right-hander struck out seven and walked a season-high five.

“Just didn’t have a great arsenal to work with,” Musgrove said. “The walks obviously hurt me a lot. Just a lot of wasted pitches, a lot of extended innings. I made the night a lot harder on myself than I needed to.”

The Dodgers extended their lead to 3-0 in the fourth. Chris Taylor’s sacrifice fly scored Will Smith, who doubled and took third on Musgrove’s wild pitch.

The Padres had just two runners reach second base until the eighth. Blake Treinen gave up back-to-back, two-out singles to Ha-Seong Kim and Fernando Tatis Jr., putting the tying run at the plate. But Wil Myers struck out swinging to end the threat.

Former Dodger Manny Machado, who was booed heartily, went 0 for 3 with a walk. Tatis was 2 for 4 with two strikeouts in the Padres’ third straight loss.

Mired in an offensive slump, Taylor made two stellar defensive plays in center field. He had a snow-cone catch against Myers in the fourth and robbed Machado of a two-run homer at the wall to end the fifth.

“He was sitting on that pitch all night, he was working me to make that pitch,” Urías said. “I thought it was going to go over the fence. Luckily, it didn’t and it was a great play by Chris.”

Taylor nearly nabbed a third catch. A ball hit by Myers went off the tip of Taylor’s glove for a two-out double in the sixth.

San Diego fell into a tie with Cincinnati for the second NL wild card.

“Everyone is in that lull right now of feeling we can’t get things right,” Musgrove said. “Underperforming the last month and a half has really set us back.”