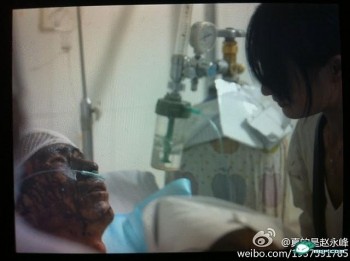 Duan, a peddler, beaten for a chivalrous assist in Kunming, China. (Posted to Weibo.com)
China

The “chengguan,” a type of municipal police, have claimed another victim in China. A street vendor in Kunming City in Yunnan Province was severely beaten on Sept. 3 by a group of these urban police and is listed in critical condition at a local hospital.

According to a report in Yunnan Xinxibao (Yunnan Info Daily), the vendor, Mr. Duan, had attempted to come to the aid of a female vendor who was holding a baby in her arms. At about 11 p.m. the female vendor was hit by the black-garbed police, resulting in the baby’s nose being bruised and starting to bleed during the conflict.

As Duan came forward to stop them, he ended up being attacked by seven or eight policemen with steel pipes and clubs. When he passed out and fell down to the ground with blood all over his face, the police hurriedly left the scene.

Chengguan is short for City Urban Administrative and Law Enforcement Bureau. This police force is established in every city in mainland China and is said to be responsible for non-criminal urban management, including patrolling for unlicensed street vendors.

Though the agency is supposed to protect the public, beatings by chengguan have become so pervasive that being called “chengguan” implies a person is a bully. There have been a number of recent incidents involving beatings that have sparked riots.

In this case also the chengguan’s violence sparked a violent response. According to the video posted on the Internet by a witness, a couple of furious residents smashed the windows of their patrol vehicle. About one hundred other street vendors followed the police to the Huguo Police Station and demanded an explanation.

“The chengguan used steel pipes and clubs instead of their hands to hit that street vendor. After he was beaten to the ground, seven or eight chengguan even stomped on his body,” said a furious witness.

A local resident told The Epoch Times: “It is common to see chengguan hit street vendors in this area. We think it is outrageous. Those street vendors simply want to make a living by selling some vegetables or petty products during rush hour, but once they are noticed by these chengguan, their articles are confiscated.

“If the vendor refuses to cooperate with them, the chengguan beat the vendors up and then drive away. I have seen these scenarios in person a number of times. Nowadays chengguan are nothing more than gangsters.”

The doctor who treated Duan diagnosed several head injuries, two fractured ribs, and a fractured right ring finger. As one of the fractured ribs had perforated his lung, the hospital issued a Notice of Critical Status three times to his family. Because he is from a low income family, they cannot afford the expensive medical bills.