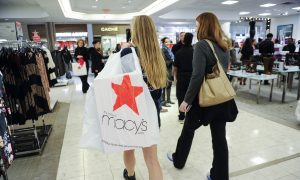 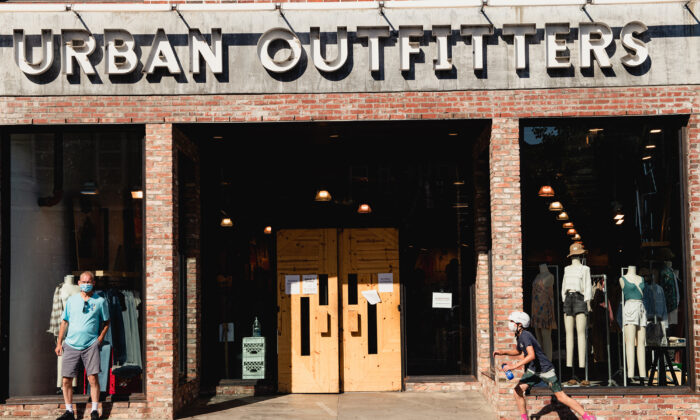 A person wearing a protective mask rides a skateboard past an Urban Outfitters store in downtown Asheville, N.C., on Wed., July 15 2020. (George Etheredge/Bloomberg via Getty Images )
US News

Many Americans are supporting the United States Postal Service by buying merch on its website—and at least one company was taking note.

Urban Outfitters had two Postal-Service-themed items for sale: a $250 sweatshirt and a $125 t-shirt, both made by streetwear company Anti Social Social Club. The sweatshirt and t-shirt included retro USPS logos and muted pastel colors.

But by Tuesday afternoon, the listings were taken down.

Under Postmaster General Louis DeJoy, the USPS has slowed delivery, taken high-speed letter sorters out of commission, and issued a warning to election officials that mail-in ballots will no longer automatically be delivered as priority mail. The postal service also started reducing post office operating hours across several states, cut overtime for postal workers, and removed some of the blue letter collection boxes.

On Tuesday, DeJoy announced that he is suspending operational changes to the USPS after widespread criticism.

If you buy directly from the postal service’s website, all of the proceeds go to the USPS. But none of the proceeds from Urban Outfitters’ sweatshirt and t-shirt were going to the Postal Service.

Urban Outfitters did not respond to a request for comment about why the items were taken off of the website.

Urban Outfitters isn’t the first clothing brand to capitalize on the popularity of the Postal Service. In 2019, before the current USPS crisis, fast-fashion brand Forever 21 released a collection that was designed in collaboration with the USPS.

There’s a big difference, though: Forever 21’s items were part of an officially licensed USPS apparel line, and the Urban Outfitters items had no affiliation with the USPS.

Walmart also sells USPS t-shirts, but when asked about licensing, the retailer redirected CNN Business to the third-party seller, TeeLuv, and CNN Business has not received a comment from the seller.

This isn’t the first time Urban Outfitters has found itself in hot water. In 2012, the retailer received backlash for selling shirts that resembled Holocaust-era prison uniforms and badges that Nazis forced Jews to wear. And in 2014, the brand pulled a Kent State University sweatshirt from its website after being criticized for the design that included red stains that resembled blood, which many interpreted as a reference to the Kent State Massacre, when four unarmed university students were killed and nine wounded by Ohio National Guard troops as the students protested the Vietnam War in 1970.

Urban Outfitters’ stock has gone down more than 31 percent over the past year.