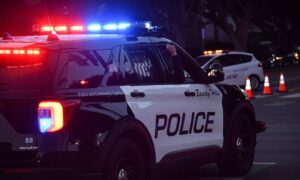 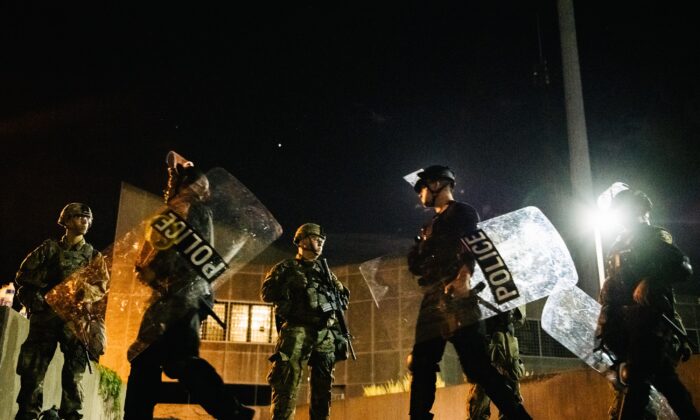 One hundred and four Americans were shot, adults and children, 19 killed, during the Fourth of July weekend in Chicago. Two police officers were shot, bringing the 2021 total to 33 officers shot so far. On the same weekend, in cities across America, 450 people were shot, 150 killed.

The major 2021 upsurge in urban violence follows the 2020 political campaigns against public safety by the left. This campaign included vilification of police as “systemically racist,” the defunding of police by mayors and city councils in Democrat cities, the disbanding of anti-crime and anti-gang police task forces, the handcuffing of police by a wide range of restrictions, the refusal of far-leftist district attorneys to indict criminals, and the widespread Black Lives Matter and Antifa rioting, looting, arson, assaults, and murders during which thousands of police across the country were assaulted and hundreds injured—riots that were celebrated by the left-leaning media and funded by Democrat politicians and other far-left supporters of extremist agitation.

The immediate consequence of the anti-police campaign was that police became increasingly scarce and increasingly ineffective. Members of police forces took leave and retirement in unprecedented numbers. The number of new recruits plummeted. The remaining police worked within highly constraining conditions imposed by their superiors, and without support from their superior officers or from their municipal bosses. Pro-active policing became a suicide mission, and police tend to stand back. Where were the police when you needed them? Underwater.

The far-left municipal, state, and national politicians who were “reimagining public safety” planned to dispense with police, replacing them with peaceful psychologists and social workers. This imagined improvement was directed to ameliorate the imaginary interests of “people of color” and “marginalized and underserved communities,” by underserving them further. No politician asked these communities what they wanted. When Gallup did, they said they wanted to maintain or increase police presence in their communities. This should be no surprise to anyone who knows anything about crime in America, because black communities suffer from crime at a level three times the level of their percentage of the population, almost all at the hands of black criminals.

The 2021 crime surge has impacted the New York mayoral race. According to the police, shootings in New York were up 166 percent; grand larcenies 66 percent; felony assaults 35.6 percent, and robberies 28.6 percent. Murder and rape were also up, and crimes against Asian Americans increased almost 400 percent. The mayoral race reflected a split among voters.

As Rikki Schlott writes in The Epoch Times:

“[The split of voters] is demonstrative of a startling disconnect in priorities between New Yorkers. …

“While Manhattan elites in their doorman buildings opted for their vision of progress in the form of defunding the police, [candidate] Adams spoke to the concerns of New Yorkers who face the prospect of violence every day in their communities. The disconnect between supposed ‘allies’ and actual victims could not be more clear.”

Those suffering from urban crime have no time for utopian notions of a society without police. They want police protection, and have every right to it.

But once you have cancelled the police, how easy is it to reactivate them? Reportedly, police morale is at rock bottom. Do those on leave want to return? How many urban police have transferred to suburban and small town departments? How many have retired and said good riddance? How many potential recruits have ditched their plans to apply for the police academy? How many police still active are “working to rule” and avoiding any situation that senior officers and politicians could use to criminalize and victimize them? Would you want to be a police officer today?

Some of the cities that have defunded the police and disbanded specialized units are now saying that they need more police. Mayor Bill de Blasio of New York said that he was going to “flood” Times Square with officers after tourists were shot. But since de Blasio defunded the New York Police Department by a billion dollars, the force has shrunk considerably. He doesn’t have the police personnel to flood the high crime districts where black and brown citizens suffer from the free rein of criminals. Mayors of some other cities, Portland, for example, are trying to direct more money to police, to borrow police from the State Police and neighboring jurisdictions. It’s hard to put Humpty Dumpty together again once you have pushed him off the wall.

What do you do when blood is running in your streets, and you have undermined your police? What do you do about gang conflict when, like Chicago with 115,000 gang members, gang members have no fear of consequences for whatever they do? What do you do when citizens are free game for criminals? Even in the unlikely event that violent criminals were arrested, they would be released immediately with no penalty. When you are a criminal, it’s great to have the district attorney on your side.

What Democrats do is blame guns. Chicago Mayor Lori Lightfoot blames guns. Apparently, in Chicago, guns have legs and run to crime scenes, and have fingers that pull their own triggers. But do not criticize, because it’s “racist” and “sexist” to criticize the mayor for the blood bath that is Chicago. President Joe Biden too knows that the root cause of crime is—yes, you guessed it—guns. He has nothing to say about the Democrat far left, including the current vice president, that advocated defunding the police, a policy that the ever-enlarging Democrat Squad continues to demand.

How have state governors helped? Gov. Andrew Cuomo of New York signed a bill to cancel cash bail, thus releasing rather than incarcerating accused felons before trial. Many quickly reoffended. Gov. J.B. Pritzker of Illinois recently signed an anti-police bill that cancelled cash bail, because that policy had worked so well in New York—for the criminals. Did the governors not care about the crime in New York, Chicago, Baltimore, Minneapolis, Portland, and the others? They didn’t seem to care about the rioting, looting, and arson in their major cities. Could they have done something helpful for public safety, rather than for criminals?