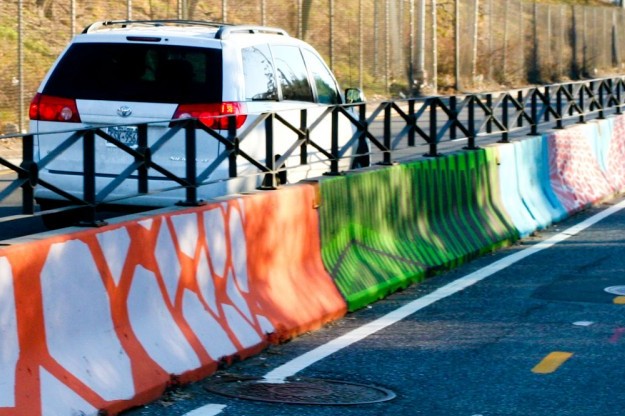 Almond Zigmund's design is painted on an 160-footlong barrier located on Williamsburg Street West between Kent and Flushing avenues in Brooklyn. (Yi Yang/The Epoch Times)
US

NEW YORK—The city is once again calling for artists to submit designs for the Urban Art Program: Barrier Beautification, which are due Friday, Feb. 24. The murals painted on jersey barriers around the city not only make the commute to work more interesting, but also create a sense of community, according to artist Almond Zigmund, the creator of the city’s most recent barrier mural installation “Planes A-Way.”

“I think any sort of art, sanctioned or not, adds a certain liveliness to the city,” said Zigmund, who is based in Brooklyn. “It kind of creates community. … I think anything that creates community is a good and positive thing. If somebody doesn’t like [the art], it creates a community just as much as if people liked it. It opens up a dialogue. It gets people talking to each other.”

Zigmund is one of the artists selected by the Department of Transportation (DOT) to paint its designs on concrete barriers that separate bicycle lanes from main traffic lanes, as part of Barrier Beautification. The program was established in collaboration with volunteer organization New York Cares. The murals are on display for 11 months and artists can receive up to $2,500 toward direct project costs.

Zigmund was notified in September that her design was chosen and was given one month to adapt her submitted design to a 160-footlong barrier section in Brooklyn on Williamsburg Street West between Kent and Flushing avenues.

“I like art that is out in the world, interacting, and beautifying our environment, making it a more interesting place,” said the artist.

While the barrier murals can provide a sense of community, it may not be the most aesthetically pleasing form of urban art according to Michele H. Bogart, professor of Art History at Stony Brook University.

“I appreciate what the programs are trying to do, in particular to get people involved in trying to make their communities look better. … But I don’t think that painting doilies or waves on jersey barriers [makes it] much better,” said Borgart who was a former member of the Urban Art Advisory Committee. “I don’t think it’s that urbanistic [because] it’s trying to deny something that you can’t get away from.”

She also points out that the designs on the art on the barriers may be distracting to drivers.