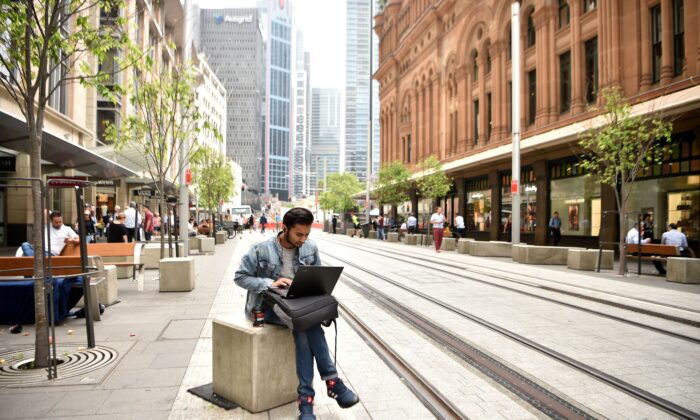 This photo shows a man using a laptop computer on a street in the central business district of Sydney, Australia, on Nov. 5, 2018. (Peter Parks/AFP via Getty Images)
Australia

‘Upside-Down’: Adopting Biden Policy on Big Business Not the Answer for Australia

Humphreys, the chief economist at the Australian Taxpayers Alliance, said while Labor Minister Andrew Leigh had correctly identified the ongoing problems in the economy, his solution—to push for more Biden-era control over big companies—was “upside down.”

On Aug. 25, Leigh delivered the FH Gruen Lecture at the Australian National University, where he said Australia was experiencing slow productivity, more market concentration in the hands of a few big companies, higher profits for companies at the expense of consumers, and decreasing “dynamism”—the ability for workers to switch jobs for higher paying roles.

The minister said that Australia, like the United States, was heavily influenced by the “Chicago School” theory—a more relaxed approach to regulating big companies—where the free market acts as the umpire against uncompetitive behaviour. This approach is best summed up in the phrase: “Big is beautiful.”

Leigh called for the country to follow in the footsteps of the U.S. Biden administration and adopt the “New Brandeis Movement” that assumes too much market concentration in the hands of a few big businesses was harmful overall to the economy and consumers.

In essence, the movement naturally leads to greater government intervention in the free market via penalties and stricter competition laws to try to level the playing field.

“Australia should not ignore this marked shift in the way that senior U.S. officials are regarding competition policy,” Leigh said.

However, Humphreys, a former lecturer at the University of Queensland, said the assistant minister missed the mark when he suggested the country needed more regulation and that it was influenced by Chicago School theory.

“It’s just patently absurd. I mean, taxes have been trickling up. Over the last couple of decades, regulation has gone through the roof. There hasn’t been any structural or microeconomic reform to speak of over the last couple of decades, except the tax cuts coming in next year,” he told The Epoch Times, in reference to Stage Three personal income tax cuts introduced by the previous federal Coalition government.

“He’s got it exactly upside-down when he talks about the causes and the way out of this problem,” he added. “Competition actually decreases because of high barriers to entry.”

“[Leigh] says there are fewer new businesses entering industry, which he points out and is correct, but he has misunderstood the cause. The cause is him and his friends down in Parliament in Canberra passing too many laws, restrictions, and regulations that limit people to start and enter into business.”

New business owners, from local cafes to trades, often have to navigate a slew of regulations, taxes, and costs imposed by local, state, and federal governments to start their businesses.

On top of this, once the business finds its feet and starts generating revenue (before taxes), employers have to stay on top of market conditions while also handling payroll and superannuation obligations (or risk fines), as well as ensure they are abiding by ever-increasing workplace laws. If they decide to hire accountants and lawyers to deal with this regulation, it will, in turn, see the prices of their products increase.

In fact, Indigenous leader and director of several companies, Warren Mundine, has pointed out several areas the government can address to boost economic growth, including ensuring reliable energy for manufacturing, cutting regulation, and improving the struggling education system.

“I have people coming to me looking for jobs, and they’re hardly literate, and you’re thinking, ‘What the Hell’s going on?'” he previously told The Epoch Times.