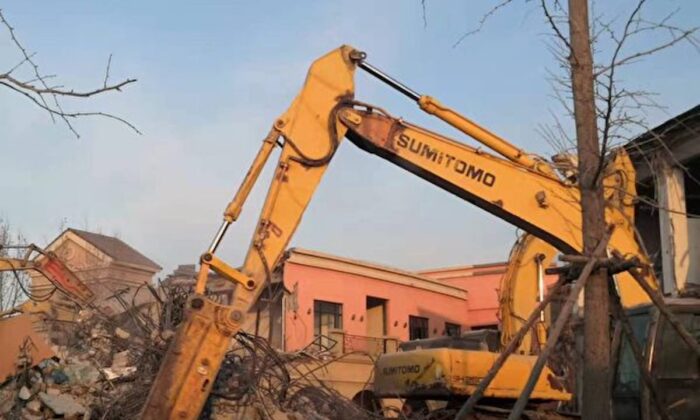 An upscale residential community, Cuijin Lake & Beautiful Villa Island, in China's Tianjin City is being demolished in this file photo. (Courtesy of Mr. Li, a resident)
By Olivia Li

Residents in an upscale housing complex in northern China’s Tianjin City are desperately hanging on to their homes. The housing community, which borders the wetlands, is being demolished due to environmental concerns, according to local authorities. But the homeowners don’t believe this reason and suspect the authorities have ulterior motives for the forced demolition.

A resident, surnamed Li, spoke with the Chinese-language Epoch Times on Dec. 30. He did not reveal his full name due to the sensitivity of the matter. He decided to contact the publication to expose the incident because he believes the Chinese state-run media would decline to report it.

Li revealed that the residents are left with no water and electricity and will lose their homes at any time, and they are not receiving a fair compensation from the government.

The community that Li lives in, called “Cuijin Lake & Beautiful Villa Island,” is well-known as a “world-class island living” community and ideal for people working in Beijing. According to their official website, the community covers an area of 494 acres, with roughly half being land and half water. There are four islands and five peninsulas, surrounded by a huge lake, and a Tuscany lakeside garden. The new villas are in French, Italian and Spanish architectural styles, with the largest model being 8,073 square feet. All these features make it a very desirable and attractive complex for middle-to-upper class residents.

There are several hundred households living in this community, most of them are white-collar employees working in Beijing. The commute time from this area to Beijing Train Station is about 30 minutes by high-speed trains, and home prices here are much more affordable than those inside the capital city.

According to Li, when the first stage demolition began on April 4, the demolition team notified the residents and told them the intention was to restore the wetlands, and all homeowners should prepare to find a new place to live.

As of now, all unsold homes have been torn down, including a group of unfinished homes still under construction. They also demolished all the clubhouses and retail stores serving the community.

These clubhouses also housed the utilities, so everyone is left without electricity, water and heating, Li explained.

He added that many residents chose to live in the community because they could afford to buy a larger home in Tianjin than in Beijing and were able to accommodate their elderly parents. But now they find themselves in a dire situation with the whole household becoming victims of forced demolition.

“Currently hundreds of self-proclaimed security guards in black uniforms are guarding the security gates of our community 24 hours a day. They intimidate residents, demanding that we move out by Dec. 31. Otherwise, they would forcibly take us out of our homes. In addition, the demolition team keeps tearing down buildings every day,” Li said.

The guards refuse to present any ID or work orders, and they tell the homeowners to go to the local government if they have any complaints, Li added.

Li said they indeed went to the local government, but to no avail.

“With the current home prices and the home purchase restrictions in Beijing, I cannot afford to buy a home, nor am I qualified to buy another one,” Li said. “We feel helpless. If they force us to move out, we don’t even know where to store our furniture.”

Some residents went to Beijing to appeal, but no one was willing to help them. At least one homeowner was arrested for appealing to higher authorities.

In addition, Li said there are rumors that an influential figure has taken a liking to the housing community and plans to convert it into a high-end senior care community for profit. Residents are noticing that, although the demolition was done in the name of wetlands restoration, the rural villages around the wetlands are not targeted for demolition at all.

In China, under communism, all land is owned by the state. When Chinese citizens buy a home, they only own the building. Over the years, this has resulted in millions of Chinese losing their homes through forced demolitions and forced relocations of villages and even entire towns when local governments decided to reclaim the land for more profitable use. Authorities generally target homes in poverty-stricken areas or rural populations. It is unusual for an affluent community, like the Cuijin Lake & Beautiful Villa Island, to be targeted for forced demolition.