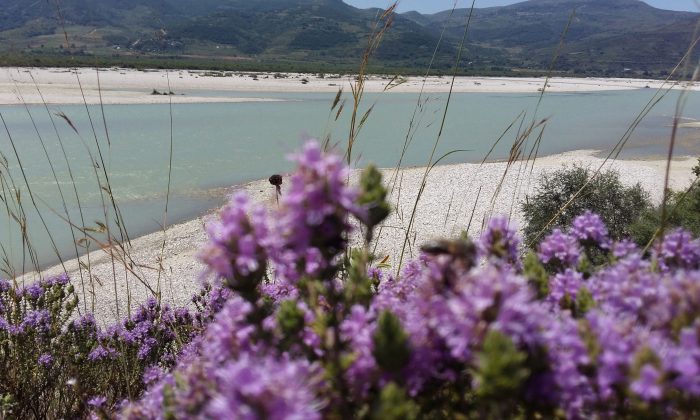 The Vjosa river, Albania. Albania's government in May defied local and international opposition and granted initial approval to a proposal by two Turkish firms to build a 25-metre (80-foot), 99,5 megawatt dam at Pocem. Residents of Kut, 170 kilometres (100 miles) south of Tirana, fear the lake created by the dam will engulf their fields and olive groves, leaving only their houses above the water line. (GENT SHKULLAKU/AFP/Getty Images)
Environment

“This river will bury the living and the dead,” sighed Enver Vasilaj, 93, standing by the Vjosa, one of Europe’s last wild waterways, which runs uninterrupted from its source in northwest Greece to the Adriatic Sea.

Vasilaj is among many residents of the remote Albanian village of Kut who are worried about the impact on their lives and livelihoods of a planned hydroelectric dam at Pocem, a few kilometres (miles) downstream.

Despite election campaign pledges to preserve the Vjosa and create a national park around the river, Albania’s government in May defied local and international opposition and granted initial approval to a proposal by two Turkish firms to build a 25-metre (80-foot),99.5 megawatt dam at Pocem.

Residents of Kut, 170 kilometres (100 miles) south of Tirana, fear the lake created by the 100 million euro (£80 million) dam will engulf their fields and olive groves – even the cemetery – leaving only their houses above the water line.

“Here we have a curse: ‘Let your tomb be flooded’,” said Dilaver Murataj, who is in charge of Kut’s land registry.

“It is a serious curse,” he added, explaining that land was so cherished here that even when people emigrated they did not sell up.

According to Olsi Nika of the environmental association EcoAlbania about 178 concession agreements have been signed for the construction of about 502 new hydropower plants.

Albania ‘Cannot Be a Museum’

Energy Minister Damian Gjiknuri said the government was determined to press ahead with the Pocem dam.

“A developing country cannot be a museum. Hydropower has drawbacks, but every development has a cost to the environment,” he told AFP.

Exactly what this cost will be remains uncertain, as there has been no information about when or even whether an environmental impact assessment – usually a prerequisite in dam projects –  would be carried out.

Once energy self-sufficient, Albania now produces only 70 per cent of its electricity needs, Gjiknuri said. For a long time, power cuts were daily events.

According to a 2015 report by the US Agency for International Development, energy demand in Albania is projected to grow by 136 per cent from 2012 to 2030.

For the authorities, the mountainous country’s river system offers an easy source of energy.

Only 30 to 35 per cent of Albania’s hydropower potential has been developed so far, according to the International Hydropower Association (IHA).

With dams “Albania could increase its influence in the regional energy market while simultaneously bolstering its own energy security,” it said.

However, it warned that the “delays due to social and environmental concerns have been a deterrent to major projects”.

“We will try to convince our friends there that it is… a chance for tourism to maintain the unique Balkan rivers in their natural state instead of building hydro plants everywhere,” said Knut Fleckenstein, the European Parliament’s rapporteur for Albania, an EU candidate country.

He said Albania was losing between 30 and 50 per cent of its electricity production to inefficiencies in the distribution network.

“It is not necessary that they have to take each and every river,” he said.

Ulrich Eichelmann, of the Rivers Watch association, has called on the Albanian government to include other renewables, such as solar power, in its long term energy plans instead of “just building dams everywhere”.

For Besnik Murataj, the village chief in Kut, the Pocem dam would deliver a  “moral death, a financial death.”

At a recent demonstration in Tirana, Kut residents chanted: “We are ready to give our lives but we will not give up the Vjosa!”

Although regional government officials have called for consultations with those who would be affected by the dam, residents remain largely in the dark about what will happen next. No one from Tirana has visited Kut and no date has been set for the start of the project.

Rahit Shehu said he only learned from a television programme that his land was threatened and that he would be compensated to the tune of one euro per square metre.

“At that price, I cannot even buy fuel for my tractor,” the 65-year-old lamented.

“We will resist until the end. We will stay, block the roads,” warned Besnik Murataj.