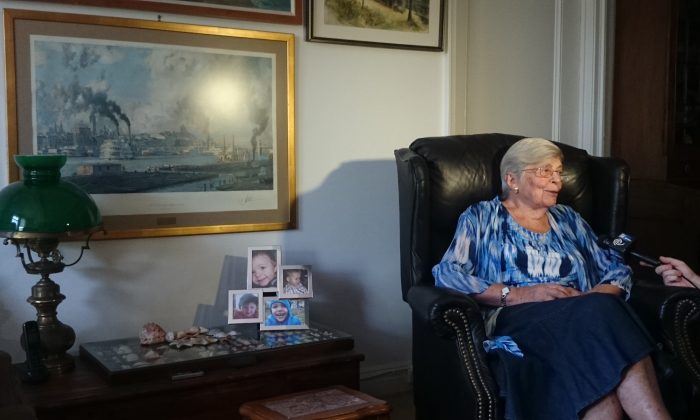 Jean Kiskaddon in her apartment in The Williams Residence on the Upper West Side, June 18, 2014. (Catherine Yang/Epoch Times)
New York

Upper West Side Community Rallies Against Move to East Harlem

NEW YORK—88-year-old Jean Kiskaddon has lived most of her life on Manhattan’s West Side, but in two or three years, she will happily move to East Harlem with the Salvation Army’s help.

Kiskaddon is currently a resident of The Williams Residence, subsidized by The Salvation Army, a building from the 1920s. When she moves, it will be to another Salvation Army-operated residence above a community center.

“I’ll be 90 then,” Kiskaddon said. The move will benefit her as she hopes to participate in the activities at the community center, and it will be a closer trip to her doctor on the northern tip of Manhattan.

But for many others in the building, the move seems like a nightmare.

“This is frightening and disappointing,” said Ada Wagner, who has lived in the 352-unit building for 26 years and uses a walker to help her get around.

The Salvation Army is trying to sell The Williams Residence to Brack Capital Real Estate for $108 million, pending the approval of the courts and the attorney general. If it goes through, the seniors will be forced to move.

On Wednesday, Wagner and a crowd of other residents who have banded together against the sale rallied outside of the residence with elected officials and community groups. They called on the Salvation Army to sell the Upper West Side building to another nonprofit that will operating the residence as is, without moving any of the seniors.

Before her mother died at the age of 91, Public Advocate Letitia James became her caretaker and needed to move her mother from Queens to live with her in Brooklyn.

“Just moving her from Queens to Brooklyn was traumatic,” James said. “And I knew that when I moved her she would be in a state of depression. All that she knew was Queens and moving to Brooklyn had an adverse impact on her health.

“I would hate to move these seniors,” James said. “Seniors experience stress, anxiety, depression, and more serious conditions when they are forced to move to an entirely new neighborhood.”

About 112 of the Williams units are occupied and the new building on 125th Street and Third Avenue will have about 250 units. All residents have been offered the opportunity to move into one of those units, or have the Salvation Army help them look for somewhere else to live. Many said the notice was sudden, and the six-month deadline given to make a decision now seems daunting.

They were loath to leave, as they have spent decades in the community on the West End and 95th Street, a convenient block away from the subway station with a supermarket around the corner and performances by Julliard students who come up from their West Side school. They frequent and have become used to the same doctors and pharmacies in the neighborhood.

“This is the story of the Upper West Side,” said Council member Helen Rosenthal, who represents the district. Low-income residents move in and create a community, only to have it turned into a luxury gated community decades later, Rosenthal said, calling it a disgrace. “I am surprised and disappointed.”

The Salvation Army has owned the building for about 50 years, and is facing $20 million in costs for major structural renovations.

It is a cost that would eventually fall on the shoulders of the residents if the Salvation Army didn’t look for other options, said Maj. James Betts, general secretary for The Salvation Army Greater New York Division. The work would be loud, disruptive, and require moving the seniors out of the building anyway, he said.

The Salvation Army hopes to sell the Williams for a profit and lease it back to continue housing the seniors while they build a new 10-story building in East Harlem. The Salvation Army already owns the East Harlem property, currently a two-story community center, and would demolish that to build the new, modernized building.

Buyer, Brack, is an international investment group and developer specializing in large projects, and owns several hotel, luxury residential, and class A office buildings in Manhattan. Brack could not be reached for comment by the time of publication on the project slated for the Upper West Side site.

Elected officials are calling on the attorney general to block the sale, saying it should be sold to a nonprofit organization instead, which will continue to house the seniors currently living at The Williams in the same way.

There is currently an undisclosed nonprofit offer on the table, according to Rosenthal. The city is also working with two other organizations to put together a deal.

“The city has money to back that up—but not $100 million,” Rosenthal said.

Elected officials said the sale goes against the Salvation Army’s mission as a charity.

Betts said it didn’t make sense for the Salvation Army to pick a nonprofit’s low bid, effectively subsidizing the city or the other organizations.

“Our own donors would question that,” Betts said.