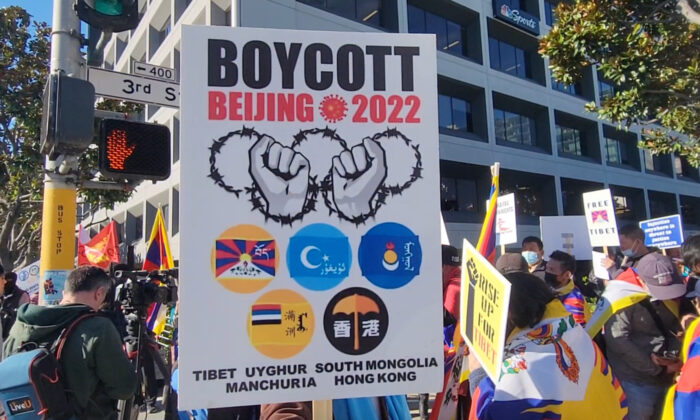 A coalition of affected peoples speak out for human rights in China, in San Francisco on Dec. 10, 2021. (Jason Blair/NTD Television)
Thinking About China

Politicians and diplomats planning to attend the 2022 Beijing Winter Olympics should think twice about the moral implications of gracing a criminal syndicate that is notorious for its record in causing mass unnatural deaths and plundering the Chinese people.

By any standard, the Chinese Communist Party (CCP) is a bona fide criminal syndicate. In its 70-plus years of rule, its policies have led to unnatural deaths totaling at least 25 million people, according to official statistics. This includes the 5 million people killed in the anti-revolutionary campaigns in the early 1950s, according to a report by Public Security Minister Luo Ruiqing to the Chinese parliament in 1954; and the 20 million people who lost their lives during the Great Famine in the early 1960s, according to a study by State Statistical Bureau Director Li Chengrui in 1997.

But the 25 million figure doesn’t include the deaths caused by the catastrophic Cultural Revolution. Former leader Deng Xiaoping admitted during his interview with Italian journalist Oriana Fallaci on Aug. 21, 1980, that the number of people killed during the Cultural Revolution was too high to be counted. Former Marshal Ye Jianying was quoted in the book “China’s Leftist Calamity” as saying that 20 million were killed.

If the crime leading to mass killing could be explained away as policy failure because of extreme leftism, then the crime committed by the power caucus itself illustrated vividly the criminal nature of the CCP.

In the five years between 2012 and 2017, 45 members of the CCP’s Central Committee were imprisoned (including 26 full and 19 alternate members), China Economic Daily reported on Dec. 2, 2021. This means the crime rate of the 376-strong Central Committee (comprising 205 full and 171 alternate members) was a staggering 12 percent, much higher than the national average of 0.363 percent. They were accused of bribery, embezzlement, and seeking personal gain through abuse of power, such as attaching a price tag to every position in the Party or government apparatus under their control.

If one focuses on sports-related events, it’s interesting to find that almost all the heads of the organizing committees of major international sports events in China ended up in prison. The list includes the following senior officials:

This could be a coincidence, but it shows the prevalence of senior officials engaging in criminal activities. This list doesn’t include former Vice Premier Zhang Gaoli, head of the organization committee of the 2022 Winter Olympics, who became known for allegedly sexually harassing tennis star Peng Shuai. Any politician from a democratic country who dares to shake hands with Zhang will risk political backlash at home.

Those who want to go to the Beijing Winter Olympics should also bear in mind that the CCP—far from honoring the pledge it made when it applied for the 2008 Summer Olympics of bringing about greater freedom of expression to the Chinese people—is using the event to strengthen its control over the people.

According to research in 2015 by professor Xiao Tengbiao of the University of Nanking Institute of Government Administration, the 2008 Summer Games marked the beginning of a brand new system of “stability maintenance”—or suppression of dissident voices and activities—in China.

When the CCP hosted the 2008 Games, it used the excuse of ensuring safety to experiment with an ad-hoc social control system, which was highly restrictive. Although many people complained of its total disregard for individual freedom, they tolerated it for the sake of the games, hoping life would return to normal after the Olympics were over. However, after authorities saw its effectiveness in monitoring and silencing dissenters and preventing petition rallies, the system became permanent.

Then-Minister of Public Security Meng Jianzhu called this restrictive system “Innovative Social Administration.” In a 2009 article in the Party’s theoretical magazine Qiushi, he said that such a system involved building six layers of control, or “six nets,” in his own words, over every citizen. The six nets were prevention and control in the neighborhood, community, workplaces, video surveillance, regional police coordination, and cyberspace controls. These six nets would “combine dots and lines, human-monitoring with technological ones, online and offline.” He made it clear that the six nets “strived to achieve an all-round, all-weather, seamless and three-dimensional coverage of the society.”

Now with the Winter Olympics, the same tactics seem to be working again. The outbreak of Omicron gave the CCP a reason to require athletes, coaches, reporters, and sports officials, as well as local staff to submit their personal information into the My 2022 smartphone app, designed to monitor the health of all attendees and staff, as well as provide COVID-19 contact tracing.

However, according to Citizen Lab, which conducts research on digital security at the University of Toronto’s Munk School of Global Affairs, the app has a serious encryption vulnerability. As a result, it could be used to connect with a malicious host, allowing information to be intercepted or even malicious data to be sent back to the app.

Citizen Lab researchers also found a text file in the app called “illegalwords.txt.” It contains 2,442 keywords and phrases, mainly written in Chinese, with a small portion in Uyghur, Tibetan, and English. These are politically taboo topics in China that are censored by the state, including criticism of the CCP and its leaders, as well as keywords related to Falun Gong, the Tiananmen protests, the Dalai Lama, and the Uyghur Muslim minority in China’s Xinjiang region.

The app also contains a reporting function that allows users to report other users if they consider a chat message to be “politically sensitive”—a phrase that is typically used in China to describe censored topics.

In other words, the CCP is again making use of the Olympics, under the pretext of health screening, to strengthen its control over a specific group, this time sports-related individuals and sports enthusiasts.

Thus, athletes aside, politicians who want to curry favor with the CCP, which is a criminal syndicate, please go to Beijing. Those who want to uphold morality and conscience, and to defend human rights and dignity, please boycott the Games.