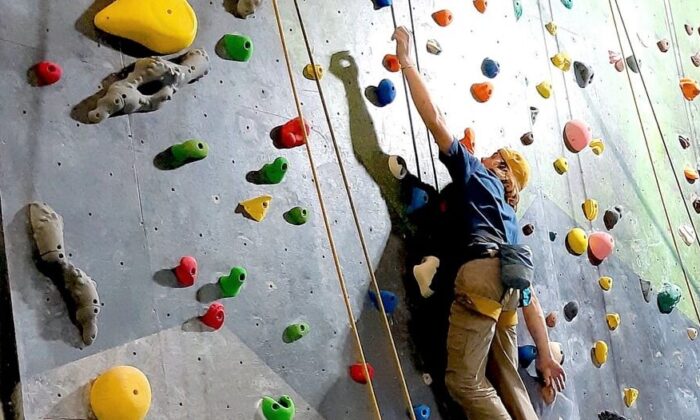 Gareth and Tracy Wall held their breath as they hit publish on the social media post that would tell the community they were shutting the doors of their Australian business due to vaccine mandates.

After 26 years, the Walls admitted that it was a “rush decision” to close the Hangout Indoor Rock-Climbing Centre in Perth, Western Australia, but felt they needed to make a “moral and ethical decision.”

“We had a number of sleepless nights—nausea and anxiety,” Tracy Wall told The Epoch Times.

“We honestly expected a fair bit of opposition and anger because we understand that the majority of people are vaccinated, and therefore they might have felt upset about our decision,” she said.

“To our surprise, we had the most amazing, heartfelt [response] … so much love.”

In the post on Jan. 20, the team announced that they would always welcome all and would not “discriminate” between customers.

“Under the new Western Australian mandates, we would be required to exclude some of our community based on their health choices … and that is something that we will not do,” they wrote on Facebook.

Wall said that within 20 minutes of the post going live, an old customer, now residing in Tasmania, rang and thanked the couple for their work, saying it had helped him “become a better person.”

“We’ve had lots of phone calls and messages saying, ‘Thank you for staying true to who we are,’” she said.

“We’re in a situation where we don’t have dependent children, but we still have a mortgage, and we still need to find money somehow,” she added. “But we both agreed two years ago that we were never going to ask people for any form of papers, or we would never segregate.”

Their rock-climbing centre is one of many small businesses that have had to navigate the ever-changing array of government-mandated COVID-19 restrictions, including forced temporary closures, social distancing rules, domestic border restrictions, and strict vaccine mandates.

“Our Premier (Mark McGowan) is really slow in giving us guidance of what he’s planning on. Businesses are normally left to pick up the slack,” Wall said. “So, it feels like an uphill battle.”

Over the past two years, Mr. and Mrs. Wall would turn on their computers each morning to check if a new “life changing mandate” had been announced, making it “very, very difficult” for the couple to manage their business.

In mid-January, the Western Australia government unveiled the strictest vaccine mandates in the country, compelling the state’s entire workforce to receive a COVID-19 booster shot.

Further, unvaccinated individuals would be locked out of a wide range of businesses including all hospitality venues, indoor entertainment, bottle shops, as well as gyms, fitness centres, and health studios—which, incidentally, includes rock-climbing centres.

“Life will be very difficult for the unvaccinated from January 31,” McGowan warned on Jan. 13 in a Facebook post.

“No pub, no bottle shop, no gym, no yoga class, no gigs, no dance floors, no hospital visits,” he added.

The Chamber of Commerce and Industry of Western Australia (CCIWA), while largely supportive of mandates, was concerned about any potential shortfall in employees.

“Businesses and individuals will need to be provided sufficient time to comply with the new directions, to ensure current worker shortages are not exacerbated,” Aaron Money, CCIWA chief economist, said in a statement.

Vaccine mandates, despite being widely enforced across the country with largely bipartisan support politically and from the business and medical community, are still the subject of contention.

Protests broke out on Jan. 22 across Australia’s major capital cities against such government regulations. Meanwhile, vaccine developer Nikolai Petrovsky has criticised the mixed government messaging on the benefits of the jab, saying it only protects individuals and does not stop transmission of the virus—undermining the reasoning for mandates.

“Every individual should be making decisions about their own health, and it is completely inappropriate to demonise or suggest someone who’s unvaccinated is in any way different to anyone else,” the lead researcher behind Spikogen told The Epoch Times.

Meanwhile, for the Walls, filtering out unvaccinated customers from entering their premises was against the values of their business.

“Climbing is something that people can’t—or at least shouldn’t—try without a fair bit of instruction and guidance to do it safely. So it’s something that has potential to be fairly exclusive and a little bit snobby,” Tracy said.

“From the beginning, our main business principle was that we would make it as accessible as possible,” she added, with both owners deciding to keep prices low.

“We had people saying, ‘Why is it so affordable? Do you realise that you could make a lot more money and still have people coming in?’” Wall said. “And we always just say, ‘Well, we make a living, we’re happy, and it means more people get to go climbing. So, it’s a win for everyone.’”