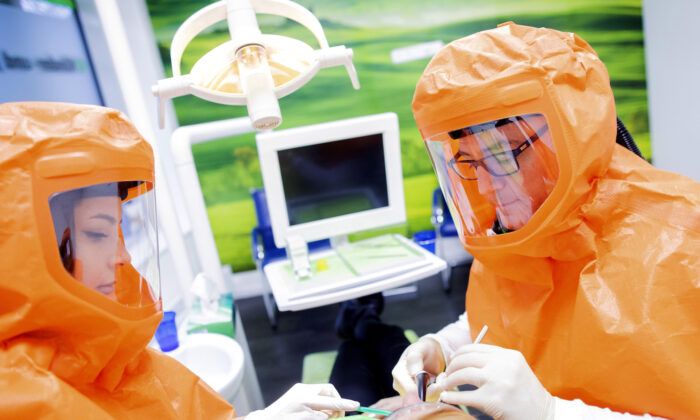 Dentists treat a patient while wearing full protective hoods on in Oberhausen, Germany, on Jan. 27, 2021. (Rolf Vennenbernd/dpa via AP)
WORLD

Chinese people expressed concerns about the new testing method—sometimes done in front of others at quarantine centers—saying it is an invasion of privacy and also extremely uncomfortable.

Novavax announced that its vaccine against the CCP (Chinese Communist Party) virus was shown to be 89.3 percent effective in preventing the COVID-19 disease in a trial in the United Kingdom, but less effective in South Africa where a different virus variant is more prevalent.

“Strong efficacy in Phase 3 UK trial with over 50 [percent] of cases attributable to the now-predominant UK variant and the remainder attributable to COVID-19 virus,” the company announced on its website.

The first cases of a more contagious CCP virus variant that was discovered in South Africa have been found in South Carolina, health officials confirmed Jan. 28.

The South African variant of the CCP virus, which causes the disease COVID-19, is known as B.1.351.

Health experts in various countries said the South African strain is concerning because it has been shown to be more contagious, and some studies have shown that it may be vaccine-resistant.

After the sudden lockdown of Tonghua city in China’s northeastern Jilin Province, food supplies have become a major problem for its 2.3 million residents. Due to the local government’s extreme COVID-19 lockdown measures, many residents confined to their homes are running out of food. Currently, all the food supplies are distributed and delivered to households by community volunteers.

Tonghua has already tested all residents for COVID-19 three times so far, but many are still required to stay inside their homes, state-run media Xinhua reported on Jan. 27.

One resident told the Chinese-language Epoch Times that local authorities in Dongchang district in Tonghua began to seal off her community on Jan. 15, nearly a week before the official citywide announcement.

A World Health Organization team emerged from quarantine in the Chinese city of Wuhan on Thursday to start fieldwork in a fact-finding mission on the origins of the virus that caused the CCP virus pandemic.

The researchers, who were required to isolate for 14 days after arriving in China, left their quarantine hotel with their luggage—including at least four yoga mats—in the midafternoon and headed to another hotel. The mission has become politically charged, as China seeks to avoid blame for alleged missteps in its early response to the outbreak.

Daily Deaths Surge to Over 4,000 in US as Case Count Declines

The daily count of CCP (Chinese Communist Party) virus cases has been declining gradually in the United States, but deaths linked to the virus reached a high in recent days, with the Biden administration projecting thousands more deaths in the coming weeks.

New deaths nationwide were at about 4,087 on Tuesday—among the several highest one-day death tolls since the start of the pandemic, according to data from Johns Hopkins University. Only three other days have seen more cases of the CCP virus than Tuesday. New CCP virus cases were about 146,640 nationwide on Tuesday, which is a decline of a few thousand from the previous day.

A half-dozen formulas were used to project that all regions of the state will top 15 percent capacity in their hospital intensive care units in four weeks, a level the state believes provides adequate cushion for any surges in virus patients. Southern California and the San Joaquin Valley currently have 0 percent capacity when taking into account both COVID-19 cases and other patients, while rural far Northern California is the only one of five regions above the minimal level.

American Airlines Group Inc reported an $8.9 billion annual loss on Thursday, its biggest on record, as travel restrictions and lockdowns due to the CCP virus pandemic ravaged the aviation industry in 2020.

The company posted a net loss of $2.18 billion, or $3.81 per share, for the fourth quarter ended Dec. 31, compared with a profit of $414 million, or 95 cents per share, a year earlier. The company said its cash burn rate was about $30 million a day in the quarter.

A nonpartisan nonprofit is recommending the federal government consider sending fewer stimulus checks out in a pending round of CCP virus relief because wealthy Americans were less likely to spend the money than poorer ones.

Congress approved and then-President Donald Trump late last year approved and signed a bill that included $600 checks for most Americans. The nonpartisan nonprofit Opportunity Insights found that households earning more than $78,000 were likely to spend just $45 from the checks over the first month after receiving them. People with lower incomes spent at least $90 from the checks, the analysis found.

Vietnam’s worst single-day CCP virus outbreak so far, its first for nearly two months, gatecrashed the Communist Party’s carefully choreographed five-yearly congress on Thursday—a major headache for a government that has prided itself on keeping the pandemic at bay.

After 83 new cases were detected in the northern provinces of Hai Duong and Quang Ninh, the health ministry massively ramped up testing and quarantine calls. The current outbreak could lead to as many as 30,000 cases in the country, Vietnam’s COVID-19 taskforce chief warned. The health ministry has proposed halting international flights and banning large gatherings ahead of the Lunar New year holiday season, just two weeks away.