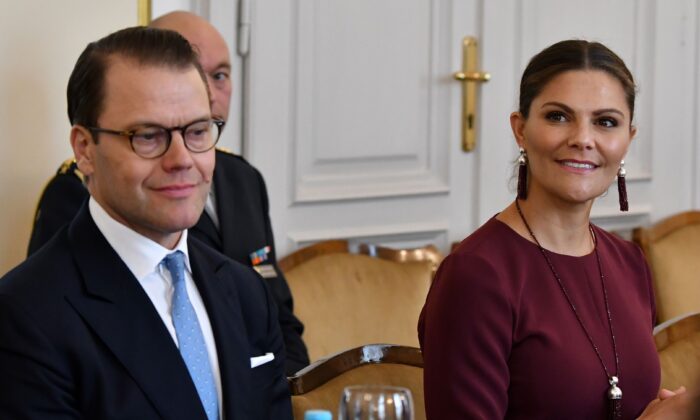 Crown Princess Victoria of Sweden, Duchess of Vastergotland (R) and her husband Prince Daniel, Duke of Vastergotland, meet with Members of Bosnia and Herzegovina's tripartite presidency in Sarajevo, on Nov. 5, 2019. (Elvis Barukcic/AFP via Getty Images)
WORLD

Sweden’s Crown Princess Victoria, next in the line of succession to the Swedish throne, and husband Prince Daniel have tested positive for the novel coronavirus, the royal court said on Thursday.

“The Crown Princess and Prince Daniel display mild symptoms, but are feeling well considering the circumstances,” the Swedish Court said in a statement, adding that the couple were in quarantine with their two children, Princess Estelle and Prince Oscar.

Four more cases of the Brazilian variant of the CCP virus, known as P.1, have been found in England, Public Health England (PHE) announced on Thursday.

The latest cases brought the UK total of P.1 variant cases to 10, including seven in England and three in Scotland.

All of 10 cases either have direct links to travel to Brazil or have been in contact with a previously confirmed case that has travelled to the South American country.

Denmark has temporarily suspended the use of the AstraZeneca coronavirus vaccine after reports of blood clots in some people. But its health authority said Thursday it has no evidence the vaccine was responsible.

Other experts pointed out that of the millions of AstraZeneca vaccine shots administered elsewhere, including in Britain, there have been no reported cases of the vaccine causing blood clots or related problems.

Denmark’s Health Authority said its decision was “based on a precautionary principle” and that one person who developed a blood clot after vaccination had died.

Some Americans Could Get $1,400 Stimulus Payments by Weekend

White House press secretary Jen Psaki stated that individuals could receive $1,400 direct payments in their bank accounts as soon as this weekend after President Joe Biden signed a $1.9 trillion stimulus package into law on Thursday.

“People can expect to start seeing direct deposits hit their bank accounts as early as this weekend,” Psaki told reporters at the White House. More payments will be issued over the next several weeks, she said, adding that more than 158 million households should expect to receive them.

“This is, of course, just the first wave,” Psaki stated, adding that “payments to eligible Americans will continue throughout the course of the next several weeks.”

The quickness in which the payments are being sent out is similar to how the Internal Revenue Service (IRS) issued $600 stimulus payments in December after a prior stimulus measure was passed and signed into law by then-President Donald Trump.

The response to the first wave of the CCP virus pandemic wiped out some 6 million jobs in the European Union, according to a study released on Thursday, with temporary contractors, young and female workers at times hit harder than in the 2008-09 financial crisis.

India reported its worst single-day increase in CCP (Chinese Communist Party) virus cases since late December on Thursday, as the western state of Maharashtra battled a fresh wave of infections and imposed a lockdown in one of its most densely populated cities.

A total of 22,854 new COVID-19 cases, the disease caused by the CCP virus, were reported in the last 24 hours, the health ministry said. It was the highest daily rise since Dec. 25, according to a Reuters tally.

Poll: 1 in 5 in US Lost Someone Close in Pandemic

About 1 in 5 Americans say they lost a relative or close friend to COVID-19, highlighting the division between heartache and hope as the country itches to get back to normal a year into the pandemic.

A new poll from The Associated Press-NORC Center for Public Affairs Research illustrates how the stage is set for a two-tiered recovery. The public’s worry about the virus has dropped to its lowest point since the fall, before the holidays brought skyrocketing cases into the new year.

A Year On, WHO Still Struggling to Manage Pandemic Response

When the World Health Organization declared the COVID-19 pandemic one year ago Thursday, it did so only after weeks of resisting the term and maintaining that the highly infectious virus could still be stopped.

A year later, the UN agency is still struggling to keep on top of the evolving science of the CCP virus, to persuade countries to abandon their nationalistic tendencies and help get vaccines where they’re needed most.

Researchers whose analysis the Centers for Disease Control and Prevention (CDC) cited in recent school reopening guidance say the agency misinterpreted their findings and should immediately loosen the recommendations.

Four doctors said in an op-ed this week that the guidance “is an example of fears influencing and resulting in misinterpretation of science and harmful policy,” arguing it “does not take into account the data we have regarding little disease transmission in schools.”