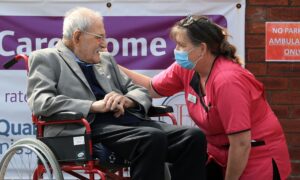 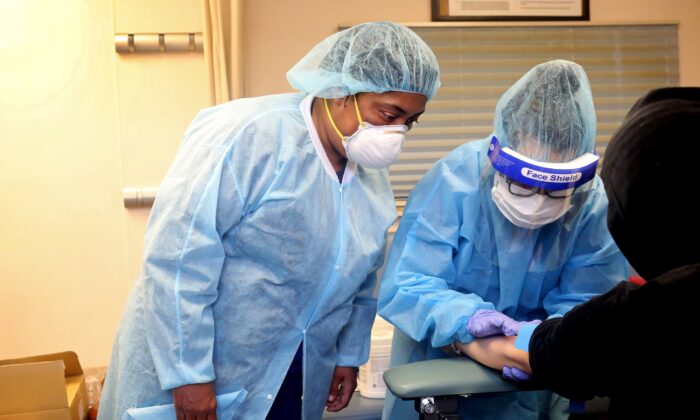 Mexico reported a near-record 1,707 confirmed deaths due to the CCP (Chinese Communist Party) virus on Wednesday.

The Health Department reported Mexico’s virus deaths now total 161,240, and confirmed infections rose by 12,153 to nearly 1.89 million. Estimates based on excess-death statistics suggest the real death toll is over 195,000.

UK Variant Has Arrived in Kansas

The Kansas health department says a more contagious variant of the CCP virus first identified in Great Britain has arrived in the state.

The health department reported Wednesday evening that a case of the variant had been identified in Ellis County in northwestern Kansas. The department said officials are conducting an investigation to determine how the patient contracted the virus and whether other people were exposed. It did not release details about the patient.

AstraZeneca’s vaccine does more than prevent people from falling seriously ill—it appears to reduce transmission of the virus and offers strong protection for three months on just a single dose, researchers said Wednesday in an encouraging turn in the campaign to suppress the outbreak.

The makers of vaccines have said that their shots proved to be anywhere from 70 percent to 95 percent effective in clinical trials in protecting people from illness caused by the virus.

But experts have been saying that even people who have been vaccinated should continue to wear masks and keep their distance from others.

Oxford’s study found that the vaccine not only prevented severe disease but appeared to cut transmission of the virus by two-thirds.

Almost everyone previously infected with the CCP virus has high levels of antibodies for at least six months that are likely to protect them from reinfection with the disease, results of a major UK study showed on Wednesday.

The results showed that 99 percent of participants retained antibodies for three months while 80 percent still had them after six months. Scientists say the results should provide some reassurance that swift cases of reinfection will be rare.

The vast majority of U.S. small businesses took a hit to their revenue last year because of the pandemic, with minority-owned businesses struggling the most and worrying more about accessing credit, according to a Federal Reserve survey released on Wednesday.

The survey, which was conducted in September and October—after the first two rounds of the Paycheck Protection Program had closed to new applicants and before Congress had finalized a nearly $900 billion aid package—showed many small businesses worried they would not survive without government help.

The Director of the CDC says schools can safely reopen even if teachers are not vaccinated against the CCP virus, commonly referred to as the novel coronavirus, which causes the disease COVID-19.

As some teachers’ unions balk at resuming in-person instruction before teachers are inoculated, Dr. Rochelle Walensky says, “Vaccination of teachers is not a prerequisite for safe reopening of schools.” Walensky cited CDC data showing that social distancing and wearing a mask significantly reduce the spread of the virus in school settings.

1 in 7 Had Antibodies in England in January: Report

An estimated one in seven people had antibodies to the CCP virus in England in January, according to an analysis of a nationwide blood-test survey.

The analysis, published by the Office for National Statistics (ONS), uses blood-test data collected during the Coronavirus (COVID-19) Infection Survey to test for antibodies. It excludes infections reported in hospitals and care homes.

WHO Team Visits Wuhan Lab at Center of Speculation

World Health Organization (WHO) investigators on Wednesday visited a research center in the Chinese city of Wuhan that has been the subject of speculation about the origins of COVID-19, with one member saying they’d intended to meet key staff and press them on critical issues.

The WHO team’s visit to the Wuhan Institute of Virology was a highlight of their mission to gather data and search for clues as to where the virus originated and how it spread. Reporters followed the team to the high-security facility, but as with past visits, there was little direct access to team members.

Denmark’s government said Wednesday it is joining forces with businesses to develop a digital passport that would show whether people have been vaccinated against the CCP virus, allowing them to travel and help ease restrictions.

Finance Minister Morten Boedskov told a news conference that “in three, four months, a digital corona passport will be ready for use in, for example, business travel.” As a first step, before the end of February, citizens in Denmark would be able to see on a Danish health web site the official confirmation of whether they have been vaccinated.

The Czech Republic has surpassed a milestone of 1 million confirmed CCP virus infections since the pandemic began.

The Health Ministry said Wednesday that the day-to-day increase in new infections was 9,057 cases for a total of more than 1 million. The country of 10.7 million people has registered 16,683 deaths.

South Korean health officials say they have detected the first local transmissions of what are feared to be more contagious forms of the CCP virus first identified in Britain and South Africa.

The Korea Disease Control and Prevention Agency said Wednesday it found four local cases of the British variant and one local case of the South African variant.

Visits to loved ones living in care homes should re-commence before residents have their second dose of a vaccine against the CCP virus, dementia support groups say.

“We feel that now the first vaccination has been given, then we very quickly need to get back to meaningful visits,” said Julia Jones, co-founder of John’s Campaign, which advocates for people with dementia.

No Causal Link Between Pfizer Vaccine and Elderly Deaths

The Therapeutic Goods Administration has cleared the Pfizer CCP virus vaccine for elderly patients, despite 30 out of 40,000 elderly people in Norway dying after receiving it.

“The deaths were recorded among very frail patients, including some who were anticipated to only have weeks or months to live,” TGA said in a release on Feb. 2. Additional research concluded that there was “no specific risk of vaccinations with the Pfizer-BioNTech COVID-19 vaccine in elderly patients.”

Japan’s App Failed to Pass on Some Contact Warnings

Japan’s CCP virus tracking application for some smartphone users has had a malfunction since September and has failed to pass on some notifications of suspected contact with people infected with the virus, the health ministry said on Wednesday.

The ministry did not say if the problem, which came with an update of the app, had contributed to the spread of the virus but it said it was working to fix it by the middle of this month. The app, named COCOA for Contact-Confirming Application, was designed by Microsoft Corp and is available for Apple Inc’s iPhone as well as devices using Google’s Android software.

Beijing City Is Underreporting the Number of Cases

Chinese authorities on Feb. 2 only announced new CCP virus infections in Heilongjiang and Jilin provinces. But an official in Beijing told the Chinese-language Epoch Times that the virus’ outbreak in the capital was out of control and that authorities were covering up new COVID-19 diagnoses there.

In Harbin, capital of Heilongjiang, residents said the regime underreported the outbreak and they were worried about the situation due to the authorities’ lack of transparency.