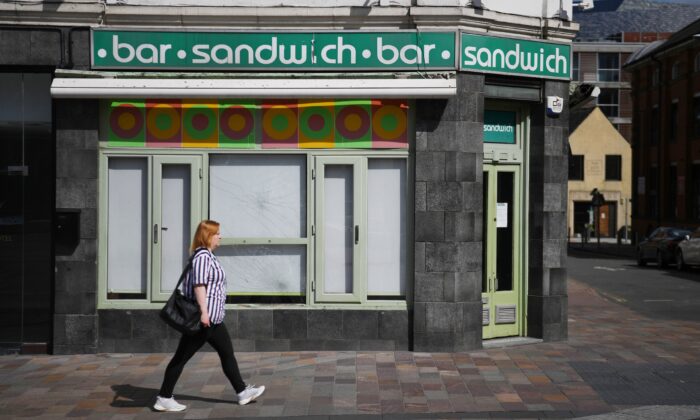 A woman walks past a closed shop in Leicester, central England on July 17, 2020. (Daniel Leal-Olivas/AFP via Getty Images)
WORLD

Sir Graham Brady, chairman of the influential 1922 Committee of Conservative MPs, welcomed the UK government’s plan to take the country out of the ongoing national lockdown, calling it a “step forward.” But he said the pace of the planned exit is “slower than many of us would have liked” and “slower than the data would suggest is possible.”

The CCP (Chinese Communist Party) virus can linger in the lungs even when swab tests of the back of the nose and throat are negative, doctors reported after unknowingly transplanting infected lungs into a patient who later died of COVID-19, the disease caused by the CCP virus.

University of Michigan surgeons obtained the lungs from a deceased donor who had tested negative for the virus and had reportedly never been exposed to it. Soon afterward, the transplant recipient and one of the surgeons developed COVID-19.

The House is expected to pass a $1.9 trillion pandemic relief package late Friday that includes $1,400 checks for most Americans and billions of dollars for schools, state and local governments, and businesses.

The legislation provides a rebate that amounts to $1,400 for a single taxpayer, or $2,800 for a married couple that files jointly, plus $1,400 per dependent. Individuals earning up to $75,000 would get the full amount as would married couples with incomes up to $150,000. The size of the check would shrink for those making slightly more with a hard cut-off at $100,000 for individuals and $200,000 for married couples.

2 US Navy Warships in Mideast Hit by Outbreaks

Two U.S. Navy warships operating in the Middle East have been struck by CCP virus outbreaks, authorities said Friday, with both returning to port in Bahrain.

A dozen troops aboard the USS San Diego, an amphibious transport dock, tested positive for COVID-19, the disease caused by the CCP virus, said Cmdr. Rebecca Rebarich, a spokeswoman for the Bahrain-based 5th Fleet. The guided-missile cruiser USS Philippine Sea also has “confirmed several cases of COVID-19,” she added.

Belgian health authorities warned Friday that the number of confirmed CCP virus infections is rising, probably due in part to the fast-spreading variant first found in Britain.

Figures released Friday showed that 2,294 new confirmed cases are appearing on average daily, a rise of 24 percent over the previous 7-day period. However, the number of reported cases in care homes is dropping, and the COVID-19 death rate continues to decline.

House Speaker Nancy Pelosi (D-Calif.) and other top Democrats are keeping a minimum wage hike in the latest COVID-19 relief package even though the Senate’s parliamentarian ruled Thursday that the raise should not be included in the bill.

The House plans on voting for the relief package, which mainly draws from a proposal President Joe Biden released before entering office, on Friday.

A single dose of Pfizer and BioNtech’s COVID-19 vaccine cuts the number of asymptomatic infections and could significantly reduce the risk of transmission of the virus, results of a UK study found on Friday.

Researchers analyzed results from thousands of COVID-19 tests carried out each week as part of hospital screenings of healthcare staff in Cambridge, eastern England.

Bachelet told the Human Rights Council in Geneva that more than 600 people in Hong Kong are being investigated for taking part in protests. Reports about violations including arbitrary detention and forced labor in China’s Xinjiang region need independent assessment, she said.

Alexander Zhang, Zachary Stieber, Reuters, and The Associated Press contributed to this report.