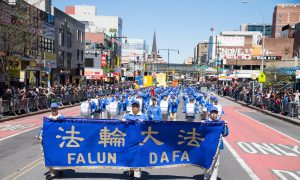 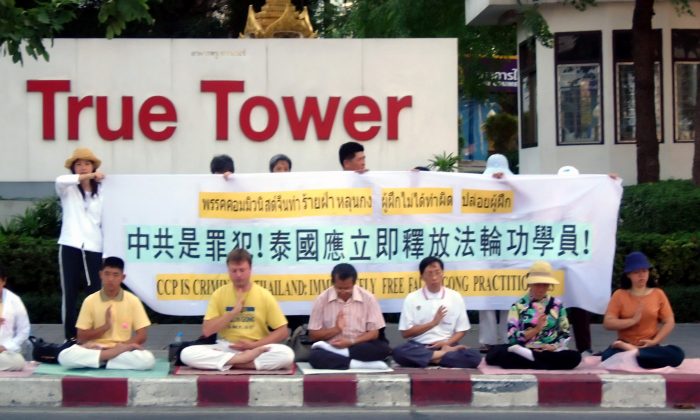 BANGKOK: Falun Gong peacefully protests across from the Chinese Embassy in Bangkok on December 31, 2005. The protest condemned the ongoing detention of five Falun Gong adherents for past two weeks at the Bangkok Immigration Detention Center, following their arrest by Thai police at the apparent behest of Embassy officials. (The Epoch Times)
Asia & Pacific

This is an update to the Jan. 1 article Five Falun Gong Still Detained in Thailand; Legality of Arrests in Doubt.

BANGKOK – Five Falun Gong refugees to Thailand remain detained at the Immigration Detention Center (IDC) in Bangkok, over two weeks after being arrested across from the Chinese Embassy for peacefully protesting the state persecution of Falun Gong adherents in China. Their arrests contravene basic human rights and the Thai constitution, and were conducted at the behest of the Chinese Embassy, say supporters of the detainees.

“The protestors were acting within the boundaries of international human rights laws, and according to conversations with members of the National Human Rights Commission of Thailand (NHRCT), within the scope of the freedoms accorded by the Thai constitution,” said a Dec. 31 Thailand Falun Gong press statement.

On Jan. 4, a delegation led by NHRCT Commissioner Jaran Dicadichai visited the IDC and interviewed the five detainees. The delegation also included representatives of the United Nations High Commission for Refugees (UNHCR) and the Royal Thai Police. This group is conducting an investigation into the arrests, and will present its findings to the Thai government.

“I think Thai government asked them to come, they are trying to find out what actually happened. The arrests are wrong and this mistake should be corrected,” said Liu Ying, one of the detainees.

Prior to the arrests on Dec. 15, Falun Gong had been protesting daily in front of the Chinese embassy for a week. The protestors were largely United Nations-protected Chinese refugees to Thailand, who had fled China after experiencing extreme persecution for their belief. Thai nationals as well as other foreigners were also present at times.

The week-long demonstration was initiated to condemn the serial rape of female Falun Gong by a Chinese policeman in Hebei province, China. “When a policeman rapes two women with others watching and gets away with it, they [the Chinese authorities] need to be told this is wrong,” said one of the protestors. “This happens because the Chinese regime lets it.”

The protests were quiet and peaceful in nature, consisting of meditation and large banners condemning persecution in China being held up. Members of a large police contingent that attended the demonstration every day manhandled the protestors on several occasions, as well as threatened them with arrest.

The Dec. 31 statement also alleges that a Foreign Ministry representative told Falun Gong of telephone calls “every day” from the Chinese embassy to the Ministry. Telephone calls to the Chinese Embassy by this reporter went unanswered. Wikorn Jarupruch, the immigration officer in charge of the case, was also not available for comment.

“This is quite a sensitive issue, about the relationship between state and state,” said Vasant Panich, NHRCT Commissioner, when queried about the Commission’s view on the legalities of the arrests.

“This is not an appropriate time to speak about this. I might speak for just myself, but what I say will still affect the Commission.” The NHRCT will be holding a meeting to formalize its view of the events within the next two weeks.

Panich’s comments about Falun Gong protests being a sensitive issue for Chinese officials are an understatement, says Chen Hua, another UN-protected Falun Gong refugee in Thailand, who was detained six times by police in China and spent a total of three years being “reeducated” for persisting in her beliefs, three years which included extensive forced brainwashing and torture. Earlier this month in Argentina, Argentine police reportedly stood idle in full view of a group of Chinese thugs that were assaulting a group of peacefully protesting Falun Gong and destroying their banners. This happened soon after the group served a visiting Chinese official, Luo Gan, with a notice of legal action against him for crimes against humanity.

Originally, eight Falun Gong were arrested, three of them children. Two of the children were released within days of the arrests, while four-year-old Huang Ying waited until December 27 to gain her freedom. Initially, she did not want to leave her detained father Huang Guohua, her sole caregiver, with her mother having reportedly died at a Chinese brainwashing center at the hands of center authorities. It took supporters four days to secure her release once her father decided it was time for her to leave detention. At present, the arrests in Thailand have caused the separations of three families.

The parents of 14-year-old Wang Anqi, who are both in detention, had their Thai visas cancelled by officer Jarupruch on December 21. According to the Dec. 31 press statement, they will be appealing the decision, as they see it having come as a result of political pressure from the Chinese embassy, and for no other reason.

“I miss my wife and my daughter misses her mom. I do not want to see another tragedy happen. I hope that the Thai authorities can make the right decision and release all the Falun Gong refugees unconditionally,” said Hua Feng, whose wife is also still detained at the IDC.

Thai immigration officials and police said grounds for the Falun Gong arrests are found in a section of immigration law saying that foreigners can’t engage in actions that disturb the “peace or safety of the public or endanger the security of the nation.” They also made reference to the Vienna Convention on Diplomatic Relations to which Thailand is a signatory, which states that the state must “prevent any disturbance of the peace of the [diplomatic] mission or impairment of its dignity.”

However, Article 38 of the Thai constitution guarantees any person in Thailand the right to practice their faith and to be “protected from any act of the State, which is derogatory to his rights… on the grounds of professing a…creed.” Article 44 states that, “Every person shall enjoy the liberty to assemble peacefully and without arms.”

The Falun Gong Human Rights Working Group ( www.falunhr.org ) submitted a formal complaint about the arrests and associated police violence to the United Nations Commission on Human Rights, according to the press statement.

Falun Gong adherents in Thailand intend to continue protesting at the Chinese Embassy, the statement said. On Dec. 31, 15 peaceful protestors were there for over an hour with a banner reading, “The CCP [Chinese Communist Party] is the criminal. Thailand: Immediately free Falun Gong practitioners.”