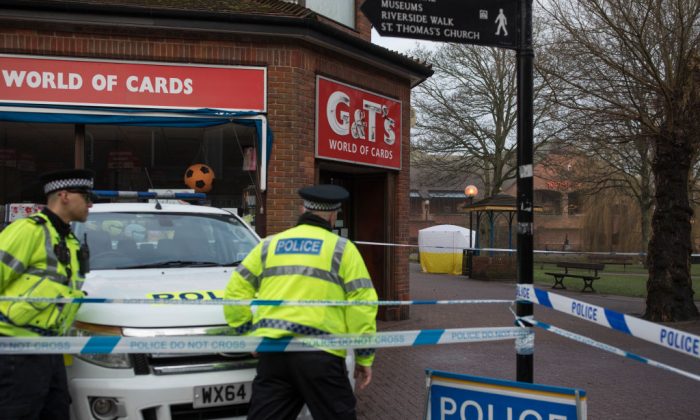 A forensic tent stands over a bench where a man and woman had been found unconscious the previous day in Salisbury, England on March 6, 2018. (Dan Kitwood/Getty Images)
UK

A man and a woman who were found “critically ill” in the United Kingdom on July 4 were exposed to the nerve agent Novichok, which is the same one used in the attack on former Russian spy Sergei Skripal and his daughter Yulia, according to Metropolitan Police.

The incident unfolded near Amesbury, in Wiltshire, England, according to police, who said the victims are a man and a woman in their 40s who “were found unconscious in a property.”

“They are both currently receiving treatment for suspected exposure to an unknown substance at Salisbury District Hospital. They are both in a critical condition,” the statement added.

Initially, officials thought that the patients became sick after consuming a contaminated batch of crack cocaine or heroin.

But, as police said in an update, “This evening we have received test results from Porton Down that show the two people have been exposed to the nerve agent Novichok.”

The identities of the couple have not yet been confirmed, but both are British citizens who are local to the area.

“The current advice … based upon the number of casualties affected, is that it is not believed that there is a significant health risk to the wider public. This will be continually assessed as further information becomes known,” said Public Health England in a statement.

Samples of the toxin involved had been sent to the nearby military research center of Porton Down for testing, according to the Metropolitan Police.

The case was being treated with “utmost seriousness,” a spokesman for Prime Minister Theresa May said on Wednesday.

The British government’s emergency response committee had met over the incident in Wiltshire and ministers were being regularly updated.

Metropolitan Police said that counterterrorism officers are involved in the investigation, “Given the recent events in Salisbury, officers from counter-terrorism network are working jointly with colleagues from Wiltshire Police regarding the incident in Amesbury.”