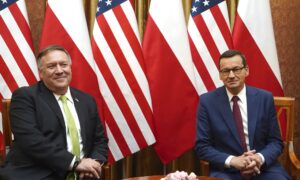 Video: Migrants try to get through border, are hit with gas
By Jack Phillips
Print

Officials have released a photo of a woman, a mother of two, who was impaled after falling from the border wall and landing on a piece of rebar as she tried to scale the U.S.-Mexico border near San Diego, California.

It released a photo of the woman on Nov. 25, showing her lying on the dirt, with someone lifting her body. A dark pool of liquid, presumably blood, can be seen behind her.

The woman, who was not identified, was hospitalized with non-life-threatening injuries while her children were evaluated for “potential fall trauma,” said the U.S. Customs and Border Protection. The two young children were released into the Border Patrol’s custody.

The agency said it found the woman and her children, ages 3 and 5, on Nov. 23, east of the San Ysidro port of entry, which is a crossing point between San Diego and Tijuana, Mexico, where migrants have tried to rush the border only to be repelled by agents.

The woman and kids, who are from Guatemala, were discovered in an area that the Border Patrol called an “active construction site,” adding that 14 miles of new walls were being constructed to replaced old barriers.

Border Patrol officials said the rebar piece pierced her side and buttocks. “Agents rendered aid and requested EMS and the San Diego Fire department for assistance. The woman was also taken to a local hospital and is currently being treated for non-life threatening injuries,” said the release.

“Entering our country illegally, particularly over our walls is not only dangerous, but also very foolish,” San Diego’s chief Border Patrol agent, Rodney Scott, wrote in a statement on Nov. 24. He added: “This woman placed her own life and her children’s lives in peril. She could have easily died if not for the quick response by our agents and EMS.”

On Nov. 26, the Department of Homeland Security said that most migrant caravan members who are trying to get into the border are male and about 90 percent won’t qualify for asylum.

“The caravan members are predominately male,” Department of Homeland Secretary Kirstjen Nielsen wrote in a statement. “It appears in some cases that the limited number of women and children in the caravan are being used by the organizers as ‘human shields’ when they confront law enforcement.”

She elaborated on the requirements for asylum-seekers trying to gain entry into the United States.

“The overwhelming majority of these individuals are not eligible for asylum in the United States under our laws. Historically, less than 10 percent of those who claim asylum from Guatemala, Honduras, and El Salvador are found eligible by a federal judge. 90 percent are not eligible,” Nielsen added.

“Most of these migrants are seeking jobs or to join family who are already in the U.S. They have all refused multiple opportunities to seek protection in Mexico or with the United Nations. Seeking employment or family reunification are not grounds for asylum under our laws, or any international obligation,” she explained.