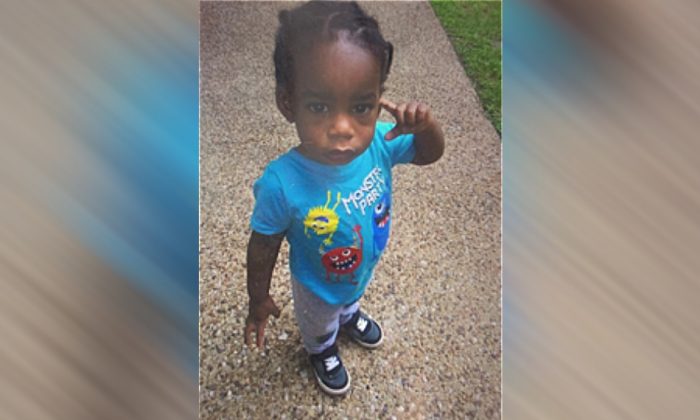 A picture of Cedric Jackson issued by the authorities to media. (Dallas Police Department)
Crime and Incidents

A man charged in connection with the death of an 18-month-old Dallas boy told officers the child became unresponsive after he tightly swaddled him and left his body at a dumpster, an arrest warrant affidavit has revealed.

The remains of Cedric Jackson are believed to have been found at a landfill site in Rowlett, Dallas, police announced on July 11 a day after he went missing. Officers added that they are waiting for a positive identification of the body.

“This is not the outcome we had hoped for and we want to extend our deepest sympathies to the family at this time.”

The officer explained that police had located what they believed is the child’s remains after the boyfriend of the boy’s aunt, Sedrick Deshun Johnson, 27, confessed to dumping his body in northeast Dallas.

Cedric was “swaddled in his blanket on the floor, at the foot of the bed,” before he became unresponsive, Johnson admitted to police officers, according to an arrest warrant affidavit cited by CBS 19.

According to records, the child’s aunt, Chrystal Jackson, had temporary custody of him. He had only been at her home since May 21.

Police: Johnson confessed he took the child and left him in a dumpster. Police then learned the dumpster was emptied and the contents were in the landfill. WATCH LIVE: Dallas police share the latest on the search for a missing 18-month-old boy. https://t.co/yPzZw9dQ1m

Court documents detail Johnson’s account of the events leading up to the boy’s death. He told detectives that he originally swaddled Cedric at around midnight to restrict his movements as he had made a mess with ketchup packets.

He said he later removed the boy from his swaddle after hearing him stir at around 12:30 a.m., after which Cedric began to throw up.

Johnson explained that although Cedric’s heart was beating, he wasn’t moving despite attempts to perform CPR for at least 30 minutes. That’s when Johnson decided to dispose of Cedric’s body in the dumpster.

The 27-year-old now faces a felony charge of injury to the child “by compressing his airways,” his arrest warrant says.

The alleged discovery of the child’s body came just hours after police issued an amber alert as they worked to locate him.

Cedric’s aunt told police she put him to bed after 11 p.m. Tuesday and when she woke up the next morning, he was gone.

“He’s dead. He’s gone,” Crystal Jackson, the aunt, told WFAA. “We don’t know 100 percent of what happened,” Jackson said as she paused and began to cry. “But we all loved that baby. He was just the sweetest baby.”

Family members cast doubt on the story, saying she slept next to the boy in the same bed. Police said that a child who also lives in the same apartment witnessed someone resembling a relative entering the apartment and taking Cedric during the night, the Dallas Police Department said in an alert.

“A juvenile witness, who lives at the location, described someone who looked like a relative as having taken Cedric at some point during the night,” said Maj. Max Geron during a news conference.

Police said the witness did not talk about it until the next morning because she was frightened.

According to the warrant, a child in Jackson’s home said Cedric was regularly swaddled too tightly, and that he would “always fuss and cry prior to bedtime,” reported CBS 19.

The CPC has since removed six children, aged between 6 and 10 from Jackson’s Dallas home, it told NBC 5 on July 11.

The exact cause and manner of Cedric’s death is still under investigation by the Dallas County Medical Examiner’s Office, as well as the identification of the remains, Weddington said.

Meanwhile, the suspect remains in Dallas County Jail. Further charges could still be issued depending on the findings from the coroner’s report, police said.

A public candlelight vigil and balloon release will be held by the boy’s family at 7 p.m. on July 12 at Lake Highlands Recreation Center.

Venus Upadhayaya and Zachary Stieber contributed to this report.