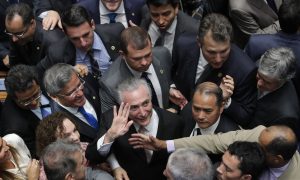 After Brazil's Rousseff Ousted, What About Corruption Probe?
0 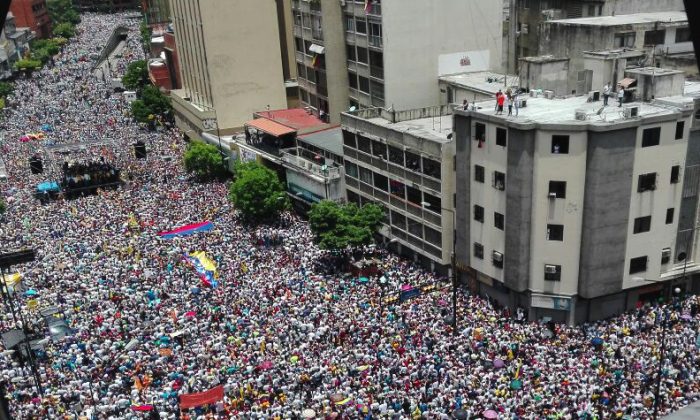 An estimated 1 million Venezuelans took to the streets on Sept. 1 to demand that President Nicolas Maduro be ousted.

An economic crisis has caused deep frustration among Venezuelans fed up with rampant inflation and food shortages.

Protesters in the capital city of Caracas are demanding a referendum on Maduro’s tenure in office. At a political event on Margarita Island on Friday, Sept. 2, Maduro was chased by angry protesters banging on pots and shouting that they were hungry.

“People are hungry, they’re dying, and the conditions are just unthinkable for a country in the Western Hemisphere,” said Jason Marczak, director of the Latin America Economic Growth Initiative at the Atlantic Council.

“It’s a humanitarian disaster that should capture the world’s attention.

“The situation in Venezuela is awful. Inflation is projected to be 720 percent this year. There are medicine and food shortages. The poverty, malnutrition, and infant mortality rates have all risen.”

That is the highest inflation rate in the world. Meanwhile, the economy will contract by 10.1 percent this year, according to the International Monetary Fund (IMF).

Part of the problem is that Venezuela relies on oil for 96 percent of its exports, according to the World Bank.

A sharp decline in international oil prices along with a fiscal deficit estimated at 20 percent of GDP at the end of 2015 have severely strained the economy. Venezuela needs to borrow an estimated $25 billion to $35 billion to stay afloat, the World Bank states.

The opposition Democratic Unity Roundtable coalition hopes to hold a referendum before Jan. 10, 2017.

If the referendum is held before this date and it goes against Maduro, it will trigger new elections.

If a referendum is held after this date, Maduro would be able to hand over power to his vice president to finish the rest of his term, which ends in 2019.

Government manipulation of the National Electoral Council, which oversees the referendum process, could block a referendum.

“The National Electoral Council is controlled by a committee imposed by the current government and it has delayed the referendum from moving forward,” said Marczak.

The government is keenly aware of national sentiment and realizes that if a referendum is held, it will likely lose, he noted.

Maduro has been in power since the death of Hugo Chavez in 2013 but doesn’t command the same respect and admiration as his charismatic predecessor. His credibility has been undermined by the view that his government is solely responsible for the current economic crisis.

“It’s a disaster of the government’s own making, so the government knows that if a recall vote were to happen, they would likely lose,” said Marczak.

Maduro’s government has been blamed for failing to generate enough revenues from the state-controlled oil business to help those suffering from the crisis. When the economy was booming due to stable oil prices, the government didn’t build the reserves needed to mitigate the current deficit.

Now the government must borrow to stay afloat while still failing to implement reforms, experts say.

“Maduro has responded by taking lessons from the Chavez playbook, blaming external actors like the United States or rallying support around an existential threat to the homeland, such as a coup attempt,” Marczak said.

That strategy hasn’t worked as well as it did for Chavez, however, and the opposition coalition has found wide support.

“People in the streets are increasingly sympathetic to the opposition [Democratic Unity Roundtable coalition] because they see the current government is unable or unwilling to address the economic and humanitarian problems the country faces,” he said.

In the face of opposition and calls for his ouster, Maduro and the government will likely continue to crack down on the widespread dissent as it feels more threatened, according to Marczak.

As discontent deepens, armed gangs have proliferated. “Lawlessness pervades in the country and it adds to the government’s rhetoric that there are threats to the homeland,” said Marczak, who added that while many of the armed bandits are loosely affiliated with the government, common criminals are also trying to make ends meet.

The United States has taken a hands-off approach to the crisis.

“The U.S. seems to be waiting and watching what happens. There isn’t a whole lot of appetite to intervene because there isn’t much the U.S. can do,” said Reggie Thompson, a Latin America analyst at global intelligence firm Stratfor.

U.S.–Venezuelan relations have been tense in recent years. Chavez and Maduro both opposed U.S. policies in Latin America, and Maduro has continued Chavez’s efforts to increase Venezuela’s influence in the region.

The United States does not maintain an embassy in Venezuela.