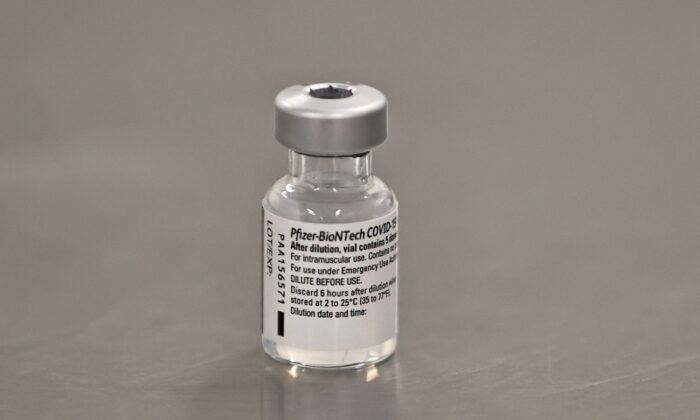 A vial of the Pfizer-BioNTech COVID-19 vaccine in a file photo. (Liam McBurney/Pool via Reuters/File Photo)
UK

Potentially up to 40 percent of care home workers won’t get inoculated with a CCP (Chinese Communist Party) virus vaccine as the UK government rolls out its Pfizer-BioNTech vaccination programme, a leader of the sector in England said on Saturday.

Health and social care workers are one of the groups on the priority list suggested by the Joint Committee on Vaccination and Immunisation.

“We know that between 50 and 60 percent, depending on individual services, or actually the staff, are saying that they will definitely have a vaccine and are very keen,” Nadra Ahmed, chairwoman of the National Care Association, told Misha Husain from BBC Radio 4’s Today programme.

“We understand between about 17 and 20 percent of staff in services are saying they definitely won’t have it,” she said, “and then you’ve got the rest who’re waiting to see.”

Therefore, she said, potentially 40 percent of the workers would decide against taking the vaccine.

She said it’s “stunning” that such a high percentage of care home workers may not want to take the vaccine because “they’ve been working and seeing the direct results of the impact of this virus.”

She also said that the take-up of flu vaccine among care workers “isn’t very good” either.

“I think in the NHS they’re incentivized to have it, which seems quite perverse in some ways,” she said. “We can’t make people, it’s not in their contract currently that they have to have these vaccines.”

In an email to The Epoch Times, Ahmed said her figures were drawn from “an internal survey of a few care providers in our membership and reinforced by other representative bodies involved in social care.”

Ahmed did not confirm which representative bodies were consulted or how large the sample size was.

An article published on Thursday by trade magazine Community Care said that 41 percent of 300 staff who participated in a snapshot survey said they would not take a vaccine, citing reasons including a lack of information about side effects and the duration of immunity.

Article updated on Dec. 14 with a response from Nadra Ahmed.