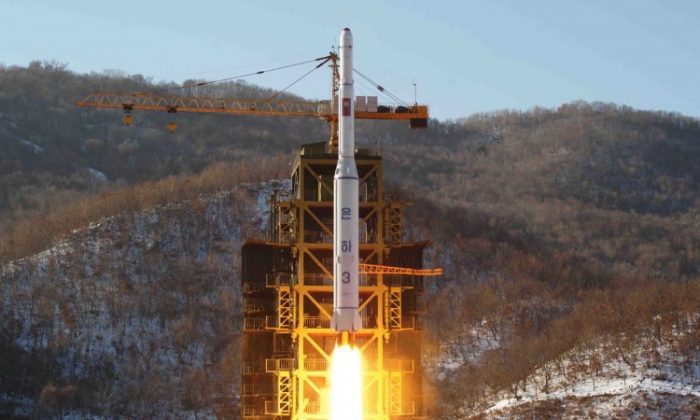 ‘Up there for years’: North Korea’s Satellite Basically Space Debris

Despite being described as a great success by North Korean state media, the satellite the country launched into orbit last week is little more than space debris.

“It’s spinning or tumbling, and we haven’t picked up any transmissions,” Jonathan McDowell, a Harvard astronomer, who also tracks rocket launches, told The New York Times. “Those two things are most consistent with the satellite being entirely inactive at this point.”

North Korea’s leadership has used the rocket launch that put the satellite into orbit to bolster leader Kim Jong Un. The successful launch—which came after five previously failed attempts—has been condemned by countries around the world and was a violation of a United Nations prohibition

The satellite will not immediately fall back down to Earth.

“It is certainly continuing to complete orbits. It is up there and it will be up there for years. But the thing is sort of twirling around. It seems to me the satellite is not working,” McDowell told The Associated Press. The satellite was reportedly equipped with a camera that was constantly pointed towards Earth.

“It’s clear that the rocket part of this mission worked very well for the North Koreans,” McDowell told the Times. “They ended up in the right orbit. But the preponderance of the evidence suggests that the satellite failed either during the ascent or shortly afterward.”

North Korean state-run media said there were rallies “to hail the successful launch of the second version of satellite Kwangmyongsong-3,” which means Bright Star-2 or Lode Star-2, on Tuesday. It said the rocket and satellite launch was intended to commemorate the death of former leader Kim Jong Il.

State-run media has not said anything about whether the satellite is working or not.

“This launch is about a weapons program, not peaceful use of space,” U.S. State Department spokeswoman Victoria Nuland told AP.

She added that the United States would make an attempt to exert pressure on Pyongyang over its suspected ballistic missile program.

“Until they get the message, we’re going to have to continue to further isolate this regime,” Nuland said on Monday.