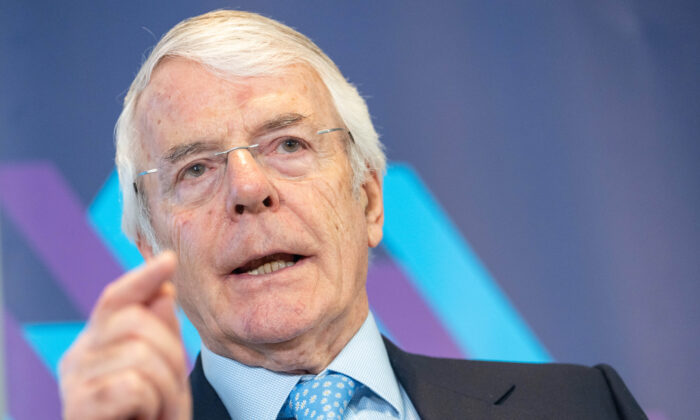 It would be “unwise” and “unsustainable” for Boris Johnson to remain as prime minister while a Conservative Party elects a new leader, former Prime Minister Sir John Major has warned.

Johnson announced his resignation as Tory party leader on July 7, triggering a leadership contest. But he insisted he will remain as prime minister until October, when a new leader is expected to be elected.

Johnson’s plan has prompted a backlash from party grandees and political opponents, who have lambasted his attempt to “cling on” in Number 10 Downing Street until the autumn.

In a letter to Sir Graham Brady, chairman of the 1922 Committee of backbench Conservative MPs, Major said such an arrangement is “unwise and maybe unsustainable” as Johnson has already “lost the support of his Cabinet, his government, and his parliamentary party.”

The former Conservative leader said: “In such a circumstance the prime minister maintains the power of patronage and, of even greater concern, the power to make decisions which will affect the lives of those within all four nations of the United Kingdom and further afield.

“Some will argue that his new Cabinet will restrain him. I merely note that his previous Cabinet did not—or could not—do so.”

Major suggested that Deputy Prime Minister Dominic Raab could be an acting prime minister until a new leader was elected.

Or, he said, Conservative MPs could elect the new leader who would become prime minister, with party members then asked to endorse the decision.

The former prime minister wrote: “Neither of these options is ideal, but the interests of the country must be given priority over all else and, with so many long-term and critical issues before us, an imaginative response even at the risk of some bruised feelings within the party—is most definitely in the national interest.”

Under the expected timetable, Conservative MPs will take part in a series of votes to whittle leadership candidates down to two, with party members then deciding the winner.

The process could take months, with a new leader expected to be in place before the party conference in October.

Major is not alone in finding Johnson’s attempt to stay on in Downing Street for months unacceptable.

George Freeman, who quit as science minister on Thursday morning, said the Queen should “appoint a caretaker under whom ministers can serve, so the Conservative Party can choose a new leader properly.”

Lord Barwell, who served as Theresa May’s chief of staff, said there was a “question whether the PM will be able to lead a caretaker government.”

Labour leader Sir Keir Starmer said the Conservatives should not “inflict” someone they deem to be “unfit” for office on the country and warned he might use a confidence motion in the House of Commons to try to remove Johnson from Number 10.