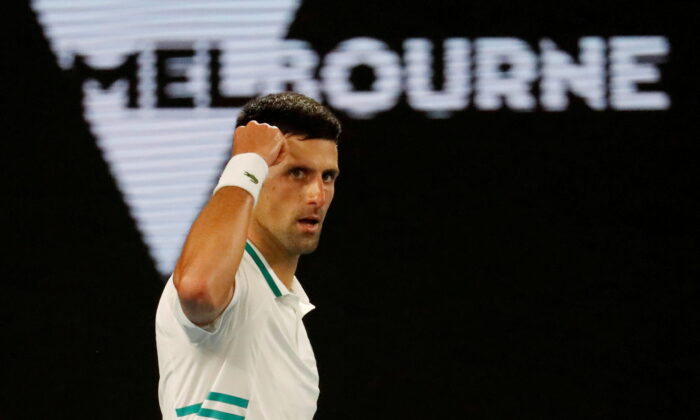 Unvaccinated Tennis Players to Be Allowed to Compete in Australian Open

Tennis players who are not vaccinated will be allowed to compete in the Australian Open as long as they undergo quarantine and test negative to COVID-19 before departure, according to a leaked email.

In an email sent to the Women’s Tennis Association (WTA) that was obtained by Tennis journalist Ben Rothenberg, Tennis Australia confirmed there were still provisions for unvaccinated players to come to Australia—clearing up recent speculation that tennis players would be unwelcome at the Australian Open.

“We ask that everyone please keep this information confidential until the government makes an official announcement,” the leaked email read.

“We feel the need to reach out to you all to clear up false and misleading information that has recently been spread by other parties about the conditions that players will be forced to endure at next year’s Australian Open.”

“Our health advice is that when we open the borders, everyone that comes to Australia will have to be double vaccinated,” Hawke told ABC radio on Oct. 20. “That’s a universal application, not just to tennis players.”

However, Victorian Sports Minister Martin Pakula said vaccination requirements for tennis players were not settled yet.

“[W]e are still talking to the Commonwealth about whether the rule for international unvaccinated arrivals is either 14 days quarantine, or they are not coming into the country at all. We don’t expect that to be settled for another couple of weeks,” Pakula told 3AW on Oct. 25.

“We are still resolving with Tennis Australia and the Commonwealth the question of whether unvaccinated foreign nationals will be allowed into Australia at all and, if so, under what circumstances.

“In the end, it’s a federal decision about who gets into the country and the circumstances in which they get in. We are still having that conversation with them. And we’re obviously talking to Tennis Australia, who is also talking to the Commonwealth.”

Nine-time champion and men’s number one tennis player Novak Djokovic said on Oct. 18 that he would not reveal whether he had been vaccinated or not.

“It is a private matter and an inappropriate inquiry,” Djokovic told the online edition of Serbian daily Blic. “People go too far these days in taking the liberty to ask questions and judge a person.”

“I am following the situation regarding the Australian Open, and I understand the final decision (on COVID-19 related restrictions) will be made in two weeks.”

Women’s number one player Ash Barty weighed in on the matter and said that there was no need for her “tell everyone” about her vaccination status.

“[A]t the end of the day, it’s part of your medical history. You understand people make decisions for different reasons, and you have to respect that,” Barty told the Courier Mail.

“From my point of view, it’s personal to me. I had my vaccine in April. I was fit and healthy, and I was doing it for the people around me to make sure we were safe.”

Victorian Premier Daniel Andrews said on Oct. 19 that unvaccinated athletes would not be able to enter the state.

This comes as the state emerges from the world’s most prolonged lockdown, with major business reopening on Oct. 29 when the state fully vaccinated rate reaches 80 percent.

“[The virus] doesn’t care what your tennis ranking is or how many Grand Slams you’ve won. It’s completely irrelevant,” Andrews told reporters.

“If they did get a visa, they’d probably have to quarantine for a couple of weeks when no other players will have to.”