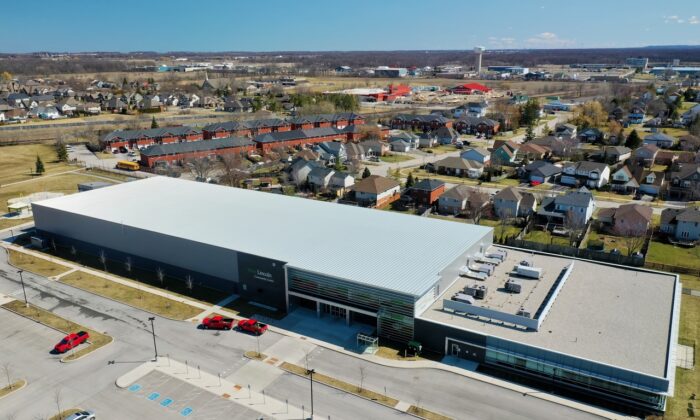 An Ontario mayor is protesting against his municipality’s COVID-19 vaccine policies, which prevent him from entering his office and other municipal buildings due to his being unvaccinated.

On Aug. 8, Dave Bylsma was joined by supporters at the West Lincoln Community Centre, roughly 36 kilometres from St. Catharines, Ontario, in a protest against the vaccine policies that he said have prevented him from fulfilling his duty as mayor over the past eight months.

Bylsma was originally set to deliver a speech that day at the opening ceremony of the 13 For 13 Canada Summer Games hosted by the municipality. But because of the weather, the event was moved indoors to the community centre, where Bylsma said he was denied access.

He subsequently called on members of the community to join him at the community centre to protest the move. Roughly 400 people responded to the call in less than two hours, Bylsma told The Epoch Times.

“Our vaccine policy in the municipality of West Lincoln prohibits anybody on staff who is not vaccinated from entering any of the municipal buildings. I’m not allowed in my own office, I sign bylaws on the hood of my car, I am not allowed into council meetings in person,” Bylsma said in a video posted on social media by Danielle Ideias.

The Epoch Times reached out to the West Lincoln Township office for comment, but didn’t hear back by publication time.

Bylsma said he had discussed with the community centre staff about “the ridiculousness that … I can attend [the event] as a citizen, but I can’t fulfill my duties as mayor because I am unjabbed.”

“Enough is enough. I’ve been embarrassed. I’m not allowed into chambers. I’ve been stripped of every responsibility that’s not statutory,” he said.

“I’m going to basically represent an opposition to our [vaccination status] here in the municipality, one that’s … voted on, and we’ll see where this goes,” he said. “I hope this ridiculous, inconsistent, unconstitutional injustice gets righted, maybe in small part due to our efforts here today.”

Bylsma said the staff later invited him into the building, which he said was to “bait me into violating the policy” so an internal complaint could be filed against him, pointing to a similar incident that occurred to his colleague Councillor Harold Jonker.

“Recently there was a ruling against Harold Jonker,” Bylsma said. “Myself excluded, but our council voted to accept the [integrity commissioner report] recommendation that he lose 30 days of his wage for participating in the Ottawa truck rally as a truck driver, … and they’re saying the premise is that you’re a councillor 24/7.”

Bylsma said that if the same logic was applied to his situation he would be considered “mayor 24/7.”

“So I couldn’t go in [to the community centre] as John Q. public figure, because I hold this [mayoral position] 24/7. Now I find that to be patently ridiculous.”

Jonker said he “got into big trouble” after an integrity commissioner’s report announced that he had broken the code of conduct for his role in the truckers’ Freedom Convoy protest held in Ottawa earlier this year. Jonker said he led the Niagara convoy.

“I’m in the same boat as [Bylsma] is. I can go into our township building, as a public person, like as part of the public, but I cannot go into our chamber,” he told The Epoch Times. “And same with the arena. I can go in there as a public person, but I can’t go in there as councillor because then I fall underneath their employee policy and that [vaccine policy] is still in place.”

According to Jonker, West Lincoln’s vaccine policy was put in place by the Emergency Operations Center (EOC), when the Ontario government declared a provincial emergency on March 17, 2020, at the onset of the COVID-19 pandemic. After the gradual relaxation of the pandemic-related restrictions, the council decided to leave it in place following EOC recommendation.

“That’s been the frustration for the mayor and for myself like we have to find minutes, we have to do stuff in the office, and we can’t go in,” he said.

On July 18, the West Lincoln council voted to penalize Jonker for his role in the Freedom Convoy. As a result, he has lost 30 days of remuneration. He was also required to provide a list of gifts and benefits he received during the protest, and to reimburse them.