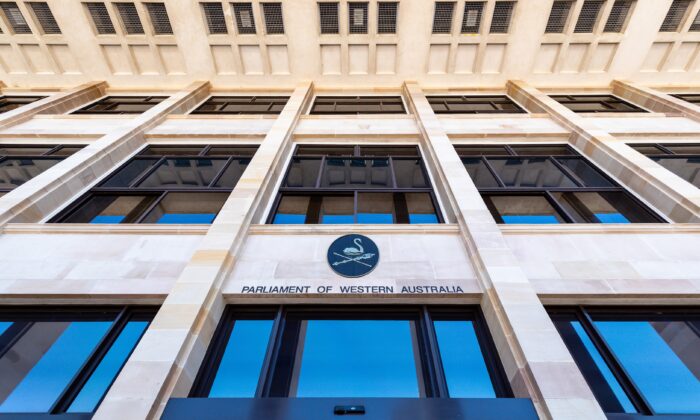 A member of a Western Australia (WA) minor party has been suspended from attending state parliament for failing to provide proof of vaccination.

Legalise Cannabis MP Sophia Moermond had been forced to leave parliament house after a motion passed requiring vaccination to attend the government building.

Moermond, who has previously raised concerns regarding the experimental nature of COVID-19 vaccines, accused the WA government of targeting the MP as a result of her stance on vaccination.

“Today, the WA Parliament passed a motion—let’s be blunt, aimed directly at me—that has resulted in my suspension because I would not reveal my private medical information,” Moermond said in a Facebook post.

“This move by Labor today was not about protecting people. It was a political stunt that flies in the face of our democratic process,” she continued.

Significant concern had previously been raised regarding the WA Labor government’s power to pass any legislation it chooses as a result of its majority control of both the lower and upper house.

The Victoria Labor government is the only other jurisdiction in Australia that has mandated proof of vaccination for MPs.

The new motion comes after WA enacted one of the broadest proof of vaccination requirements in the nation, which covers industries such as health, mining, hospitality, entertainment, and in some cases, even visiting family members at hospitals or aged care facilities.

Moermond said she was concerned that the mandates could result in division and segregation for those who are not vaccinated.

“I cannot in good conscience contribute to a two-tier society based on medical apartheid. It excludes, in this case, it would seem one person—me—because they don’t hold the same views of others,” she said.

WA Labor Upper House Leader Sue Ellery rejected the suggestion that the government was using its control of the upper and lower house to target rival MPs.

“There is no mandatory vaccination. There are rules surrounding the consequences for people who choose not to be vaccinated,” she said.

“No one is forcing you to inject anything into your body.”

Liberal MP Nick Goiran, who was not been suspended from parliament, was one of a handful of members who spoke against the motion.

“I support vaccination. I also support the right of individuals to medical privacy,” he said.

The Epoch Times reached out to the WA government but did not receive a reply in time for publication.

On Feb. 16, the state recorded the highest number of daily cases ever during the pandemic, with 115 new cases of local transmission bringing the state’s total active cases to 444.