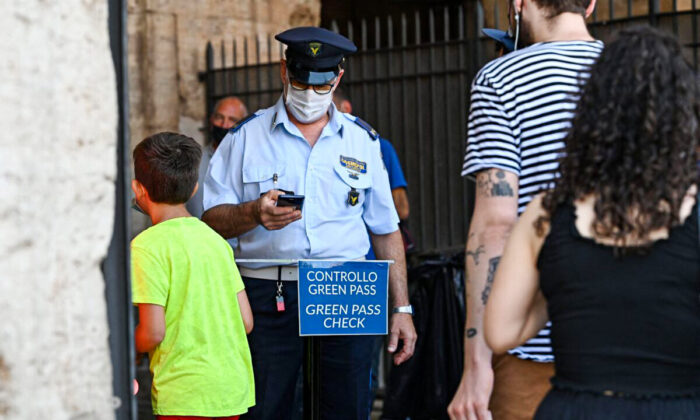 The Italian government ruled that citizens who are unwilling to get a COVID-19 shot will be blocked from entering many indoor public settings as of Dec. 6, just ahead of the holiday season.

Under the new measure, unvaccinated Italians will be unable to enter restaurants, clubs, theaters, sporting events, and museums. The government announced the rules last month, saying it is needed to encourage more people to get the shot. The restrictions are expected to remain in place until Jan. 15.

The rules do not apply to those who are either recently recovered from the CCP (Chinese Communist Party) virus or received an approved COVID-19 shot.

The country implemented it by including the shot to its “green pass,” a scannable digital or printable QR code that shows a person’s COVID-19 vaccination status. The “vaccine passport” will now be required to enter many indoor public events. Prior to the Dec. 6 update, Italians who were able to present a recent negative test were allowed to enter.

A basic version of the green pass, which can be obtained by those who decide not to get the shot and have had a negative CCP virus test result within the past 48-hours, is still valid for all workers and will be acceptable for the use of local transport and hotels.

Police started enforcing the measure from the early hours, with anyone caught on a bus, metro, tram, or train without the health certificate facing an automatic 400 euro ($450) fine.

Earlier this year, Italy imposed one of the world’s strictest CCP virus rules at the time, requiring all workers to show the green pass prior to entering their place of employment.

Workers who are not in possession of the green pass would be suspended without pay and face a fine of between 600 and 1,500 euros ($695 to $1,730) if they try and continue to work. That rule was expected to be effective until the end of the year.

Thousands of Italians in opposition to the government mandates took to the streets at the time, with protesters shouting “Liberta (Freedom)” and calling the move a political, rather than health, regulation.

Italy has one of the highest vaccine uptakes in the world with 80 percent of the population having received either one or two jabs, while around 15 percent of people have had a booster shot. In recent weeks, CCP virus infections have increased again, hitting 15,000 over the weekend.