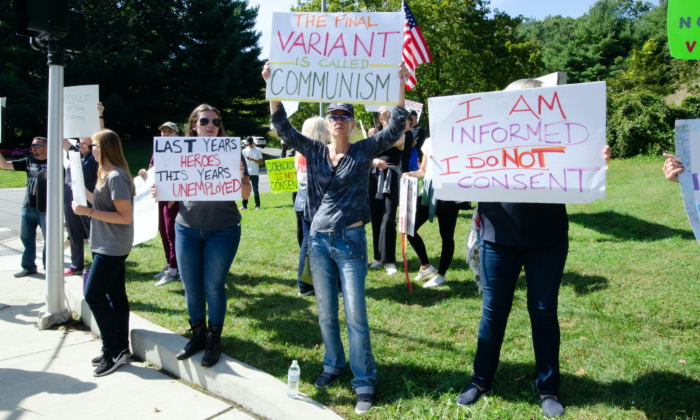 The rally began at 11 a.m., and one of the first two participants to arrive was Karen Roses, a patient care technician at a Northwell hospital in Riverhead, New York.

Roses has been in the health care industry for over 20 years. She’s unvaccinated and feels mandating the vaccine is “dangerous” and takes people’s freedoms away.

She knows her refusal to take the jab could mean she loses her job but says she’s “not going to be bullied or pressured [by] anybody for any reason.”

“It’s not an anti-vaccine statement. It’s a freedom of choice statement,” she told The Epoch Times.

Roses carpooled with a coworker who is also not taking the vaccination with one reason being she wants to have children and is afraid of jeopardizing their health.

The group topped out at about 40 participants. They gathered next to the entrance of the hospital. They held signs—one comparing the current situation to Nazi Germany—and shouted to passing drivers, who often honked their horns in support.

Gabby (who preferred not to give her last name) has been an ultrasound technician for the past four years. The 27-year-old has put in for a religious exemption with her employer for the flu shot each year and it’s been approved.

But that’s all changed and her religious exemption for the CCP virus vaccine has been denied.

“I have been told I am a danger to the public and to my patients,” she told The Epoch Times. Her employer has instituted “rolling terminations,” so she doesn’t know exactly when she’ll be fired.

She has over 200 hours of banked paid time off and sick time but if she’s terminated, she will not see any of that money.

While many of the protestors have been in the working world for some time, the youngest of the group was Maverick Stow, an 18-year-old who graduated from William Floyd High School last June.

Stow feels if the vaccine mandate is forced on health care workers today, then it will be another industry tomorrow.

“Eventually it’s just gonna be that they’re gonna start knocking on the front doors and giving you the vaccine,” Stow told The Epoch Times.

“If [the government] can force an injection, what else can they do? There’s no end,” Rizzo told The Epoch Times.

The rally at St. Catherine’s was not the only one held on Long Island on Monday. Rizzo attended another one just prior.

The consensus amongst many of the participants was that the best these rallies will do is raise awareness. Rizzo hopes for a little more.

“Maybe it’ll give more people courage driving by because courage is contagious,” she said.