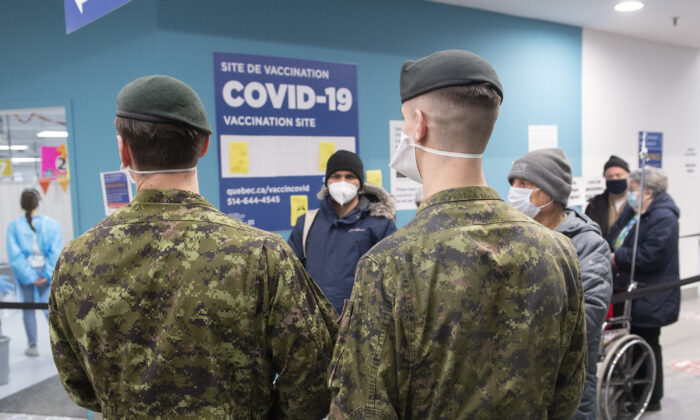 Members of the Canadian Armed Forces at a COVID-19 vaccination site in Montreal on Jan. 16, 2022. (The Canadian Press/Graham Hughes).
Canada

Canadian Armed Forces (CAF) members are still being discharged for non-compliance with the military’s COVID-19 vaccination directive even after other federal employers have suspended their vaccine requirements, Federal Court records show.

The court records, obtained by Blacklock’s Reporter, showed that Corporal Shannon Jones, a meteorological technician at Maritime Forces Pacific Headquarters in Esquimalt, B.C., was dismissed for not being vaccinated against COVID six weeks after vaccine mandates were lifted for nearly 300,000 federal employees and the RCMP on June 20.

Jones challenged her dismissal on the grounds that her application for a religious exemption from the vaccine was not fairly considered. She also said that the military will probably suspend its mandate soon considering many other federal employers have done so.

“[Jones] asserts it is inevitable that the directives will be changed to remove the vaccine mandate in view of changes to provincial Covid-19 protocols,” wrote Justice Angela Furlanetto. “She takes issue with the manner in which her religious exemption was considered.”

Only 98 CAF members have been granted religious exemptions and 42 given medical waivers, according to May 31 figures obtained by Blacklock’s.

“[Jones] contends her religious beliefs should be sufficient to satisfy the religious exemption,” wrote the court. “She argues in her written materials a religious accommodation is justified under the Charter.”

The court declined Jones’s appeal and ordered her to pay $3,200 in costs. Her dismissal adds to the nearly 1,600 cases of discharge or discipline within the CAF for members who did not comply with the COVID-19 vaccination directive, according to those May 31 figures.

However, a leaked copy of a new draft COVID-19 directive from Chief of Defence Staff (CDS) Wayne Eyre, dated July 2022, suggests that the CAF will soon drop its vaccination requirement.

The draft, obtained by The Epoch Times, says the intent of the CDS is that “the requirement for all CAF members to be fully vaccinated against COVID-19 will cease, effective the date of this amendment.” The document does not specify the date of the amendment.

According to the draft, COVID-19 vaccination will no longer be a requirement for enrolment into the CAF. In addition, CAF members dismissed in the past for not complying with the vaccination requirement will be allowed to apply for re-enrolment.

For military members progressing through “Recorded Warning and/or Counselling and Probation” processes stemming from non-compliance with the vaccine requirement, those processes will be terminated when the new directive comes into effect, the draft says.