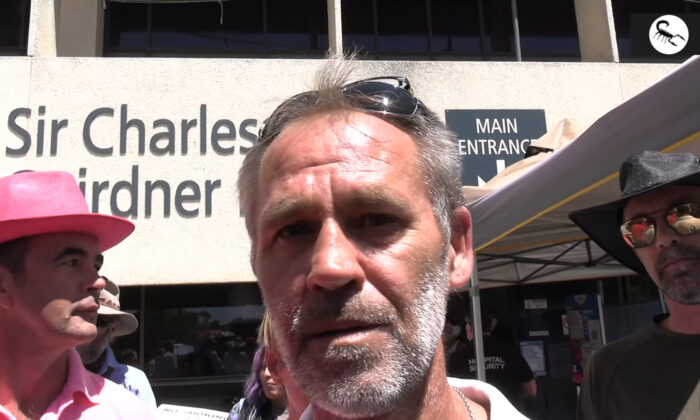 A Western Australia (WA) man has only been allowed to support his wife before a serious brain operation after a concerned crowd gathered outside the hospital entrance to show support.

Under the WA Labor government, proof of vaccination is required to enter restaurants, gyms, theatres—and all other hospitality, fitness, and entertainment venues. Unvaccinated adults looking to visit their parents at aged care facilities are prohibited from doing so.

And while unvaccinated patients seeking treatment are allowed in hospitals, unvaccinated visitors, generally speaking, are not.

Gary White explained that he and his wife, Jane, drove two hours from Bunbury to Sir Charles Gairdner Hospital in Perth on Jan. 1—one day after the state enacted its vaccination mandate.

Gary said he had planned to stay by his wife’s side as she was sedated before her operation but was surprised when they arrived at the hospital, and he was refused entry.

“Devastated really doesn’t cover it,” Gary told The Epoch Times. “I went and sat in my car and cried for about 20 minutes.”

“I had to leave my wife at the main entrance for her to go in and sit in a room of other people that all had support there, but my poor wife had to sit there on her own.”

He said the specialists they had been seeing had no issues with their decision not to get vaccinated and that he was under the impression he was exempt from the restrictions given he was taking care of his wife before the operation.

“It was extremely distressing for her because she had no support. I mean, it’s a major, major operation … and to have no support there, it’s just a horrible situation to be in for anybody.”

Gary explained he was ready to give up and began to drive home before having a change of heart and driving back to stand in front of Government House with the Umbrella Group—a group that protests against the WA government and its vaccination mandates.

However, after members of the assembly heard Gary’s story, a procession of around 30 members then marched to the hospital.

A video of the incident shows Gary being denied entry by security a second time, after which the group argued he fell under the “essential” category for visitors. He was eventually escorted inside.

Under the WA government’s “COVID-19 Public Hospital Visitor Guidelines” (pdf), essential visitors can enter hospitals as long as they abide by strict guidelines, including being escorted to a patient’s room and being banned from common areas such as cafeterias.

Essential visitors are defined as “labour support person, parent of an admitted child (including a neonatal patient), carer for a patient living with a disability, and end-of-life support person, a family member or friend required to visit a patient in the case of an emergency, or designated guardian.”

It is unclear which category Gary fell underneath.

The Epoch Times reached out to Sir Charles Gairdner Hospital and the WA Department of Health but did not receive a reply in time for publication.

“I felt relieved at first, but then probably angry later on that they can do this to people,” Gary said.

Gary did not blame the hospital for the incident but said he was concerned that the WA government’s directives put intense pressure on residents to get vaccinated.

“I think the hospital has been put in a difficult situation by these directions from [WA Premier] Mark McGowan,” he said. “But I just think it’s very sad, and a very low thing to do on his behalf, to try and manipulate people into getting the vaccine by using unwell people [in the hospital].”

The Epoch Times also understands that Gary wife Jane has also been stood down from her job working for a company under the National Disability Insurance Scheme as a result of WA’s vaccination mandates.

Concerns of Discrimination Against Unvaccinated At Hospitals

Gary’s story comes as worries have grown in West Australia that the strict protocols implemented by WA hospitals have left patients and their visitors with diminished rights and freedoms.

Dan Anderson’s eight-year-old daughter, Ivy, was diagnosed with Leukaemia and has attended Perth Children’s Hospital (PCH) for treatment since 2020.

But Dan, who has a vaccination exemption from the Australian Immunisation Register, told The Epoch Times that he and his daughter were all but confined to their room, starting when he was told he had to wear bands on both wrists before entering the hospital.

“I proceeded to wrap my wrists in two bands, one was purple, one was orange, and when I asked what it was about, she said, ‘You’re considered a risk, regardless of your exemption, and you have to be escorted throughout the hospital. You can’t go anywhere else, can’t use any of the facilities, any of the services, you will be escorted to your appointment, you’ll be kept on observation there, and [afterwards] you’ll be escorted out.”

These orders align with the restrictions found in the WA government’s COVID-19 Public Hospital Visitor Guidelines. Dan said he was informed he was a risk to the hospital when questioning the measures.

But Dan argued that vaccination did not stop transmission of COVID-19.

“I’m no more of a risk than you are, being vaccinated or unvaccinated,” Dan said he told the staff member. “Then why are you taking away my and my daughter’s human rights to use this hospital as we have for the last two years?”

Pfizer CEO Albert Bourla said in January that two doses offered “very limited, if any” protection against Omicron, while also being less effective in stopping transmission for those with three doses.

However, unlike unvaccinated individuals, double-dosed visitors are allowed to enter WA hospitals without constraint.

“I found out some more information that if we have to go into the ward and stay the night that they will lock us in our room and they will prevent us from exiting the room,” Dan said.

The Epoch Times reached out to PCH for further clarification on their protocol for unvaccinated visitors but did not receive a reply in time for publication.

WA Premier Mark McGowan has firmly defended the measures, outlining his goal to shield West Australians from the effects of Omicron as seen on Australia’s east coast.

This includes recently delaying the reopening of WA’s interstate border, which was originally set for Feb. 5, with McGowan stating the aim was to bring booster levels above 80 or 90 percent.

For the first week of February, New South Wales recorded an average of 27 COVID deaths per day, with the largest number of cases peaking at 70 on Jan. 28.

“What we’re trying to do is make sure we reduce the death rate as much as possible because by getting more vaccines out there, by having better arrangements in place, not only do you save lives, but you also save jobs.”

McGowan has trumpeted WA’s superior economic outlook—which includes a 2020-21 budget surplus while all other state’s recorded budget deficits, as well as the lowest unemployment rate in the country.

“Omicron, as we learnt over the summer, is a completely different virus. The things we were doing before don’t work the same way under the Omicron virus, and as a result, you’ve gotta reset, and you’ve gotta rethink the things you’re doing,” Morrison told 6PR on Feb. 3.

“That’s the premier’s call, and he has to make that decision based on what he thinks his health system is ready to absorb,” he added.

However, the WA government has been criticised for its failure to address an ongoing health staff shortage crisis during the two years it has had since the beginning of the pandemic.