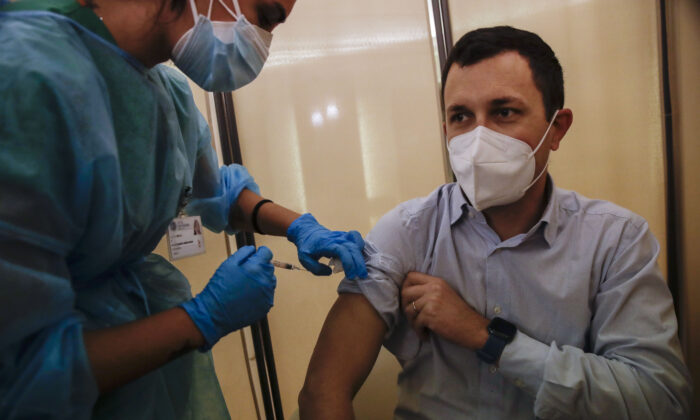 A man receives a vaccine at the Museum of science and technology in Milan, Italy, on Nov. 4, 2020. (Luca Bruno/The Associated Press)
WORLD

Starting on Feb. 22, all Italian employees in the public or private sector aged 50 and older will need to show proof of COVID-19 vaccination via the country’s “super green pass” in order to enter their workplace.

The “super green pass”—a type of vaccine passport—is also required to enter most venues in Italy.

The vaccination requirement, which is part of a rule that was published on Jan. 7, will be enforced on anyone living in Italy aged 50 and older or anyone slated to turn 50 by June 15, according to The Local. The rule applies to foreign nationals, freelance workers, and unemployed individuals.

“People won’t say hello to me anymore on the street,” Patrizia Bianco, 55, told The Wall Street Journal in January. “If I take a step toward them, they take a step back. It’s sad.”

Studies have shown that the Omicron coronavirus variant and sub-variant affect fully vaccinated and boosted individuals as well as unvaccinated people. A paper published by the University of Copenhagen, the Technical University of Denmark, and Statens Serum Institut in late January found that the BA.2 subvariant infects people regardless of vaccination status.

Italy’s COVID-19 infection numbers have plummeted in recent weeks. About 51,000 new cases were reported on Feb. 13, as compared with more than 62,000 reported a week prior, according to ANSA.

Despite the falling case numbers, Health Minister Roberto Speranza told Italian media outlets over the weekend that “we must still insist on vaccination” for people aged 50 and older.

“The more we dry out the unvaccinated areas, the safer the country is,” Speranza said. “The requirement for over-50s is a correct decision that puts us in a position to look to the coming months with greater confidence.”

Speranza didn’t make note of natural immunity or the apparent ease in which the Omicron variant and subvariant infects fully vaccinated individuals.

In nearby Austria, President Alexander Van der Bellen signed a bill into law earlier this month that requires compulsory vaccinations for all adults, aged 18 and older with few exceptions. Those who are found to not have proof of vaccination or an exemption face an initial fine of 600 euros ($680) and additional fines of up to 3,600 euros ($4,100).

Individuals can be fined up to four times per year, and the law will last until January 2024.