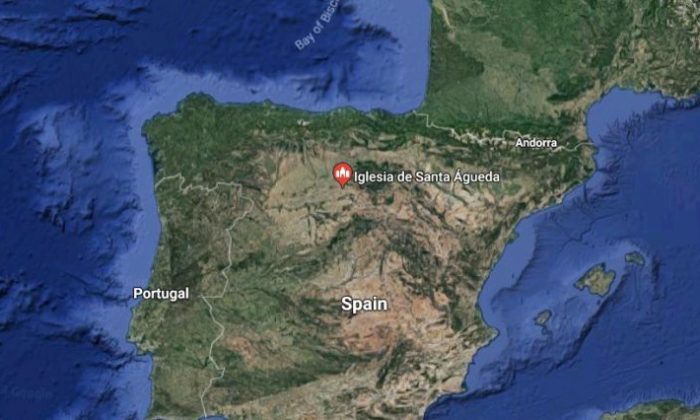 The wooden statue is now kept at the Santa Agueda church in Spain. (Screenshot via Google Maps)
Science News

A 300-year-old letter was discovered inside a statue of Jesus Christ in Spain.

The message was penned in 1777 and was stuffed inside the statue by a priest. Joaquin Minguez, priest of the cathedral of Burgo de Osma at the time, signed the document.

The statue was recently found by workers at the restoration company Da Vinci Restauro. The wooden statue is now kept at the Santa Agueda church in the village of Sotillo de la Ribera, according to local media El Mundo.

Historian Efren Arroyo said that it’s common “that many sculptures are hollow,” but it’s uncommon that documents are placed inside.

Chaplain Joaquin Mínguez told El Mundo that the statue was carved by Manuel Bal, who made five other statues that stand in the main altar of the Sotillo de la Ribera church.

According to the Daily Mail, the note describes popular Spanish pastimes, the economy, famous individuals, and political and religious matters.

“The document of the eighteenth century appeared when we were dismantling the Christ of the cross,” restorer Gemma Ramírez Millares told the Mail. “The wood is hollow inside, and the sculptor introduced the two permaninos, which we have found. The document found talks about life in the town in 1777, the author, the local economy, games and customs of the time, etc.”