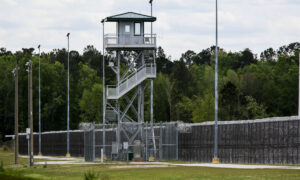 A nuclear power plant located near Wilmington, North Carolina, said it declared an “unusual event” on Sept. 17 ,amid rising floodwaters from Hurricane Florence.

The Brunswick Nuclear Plant located 30 miles south of Wilmington declared a state of emergency, which is the lowest under Nuclear Regulatory Commission guidelines, Fox News reported.

Roads surrounding the 1,200-acre complex were inundated by flooding and have been blocked off by downed trees

None of the main roads are passable, according to Joey Ledford, a spokesman for the NRC, the News & Observer reported. “The plant is safe. The reactors are in hot stand-by mode 3 shutdown.”

Ledford added to Fox that the nuclear plant is stable and poses no threat to public safety, and meanwhile, no floodwaters have breached the facility.

Officials said the plant is accessible from one route due to the floodwaters. However, there are not multiple routes available, and the plant was placed under an “unusual event,” Fox reported.

The plant was shut down before the hurricane arrived in the Carolinas, according to the report.

Daniel Bacon, a senior operations engineer, told the paper that workers are sleeping on cots and using portable toilets because the water is shut off, and the toilets cannot flush, according to the News & Observer.

“It’s kind-of like camping,” Bacon said. “Everyone is handling it very well. I haven’t heard any complaining.”

Tens of thousands of houses have been damaged, but for many parts of the Carolinas, “the worst is yet to come” as river levels rise to historic levels, said Zach Taylor, a meteorologist with the U.S. National Weather Service, according to Reuters

“The soil is soaked and can’t absorb any more rain so that water has to go somewhere, unfortunately,” he said, adding that the rivers would start to crest on Sept. 17.

Flash flooding continues over North and South Carolina and might develop to parts of Maryland, Virginia, and Delaware into Pennsylvania, according to the NHC in its 11 a.m. update.

It added: “Florence is expected to produce heavy to excessive rainfall over the next couple of days. Portions of the Mid Atlantic states west of Interstate 95 into southern New York and southern New England are expected to receive an additional 2 to 4 inches of rain…with isolated maximum amounts of 6 inches possible.”