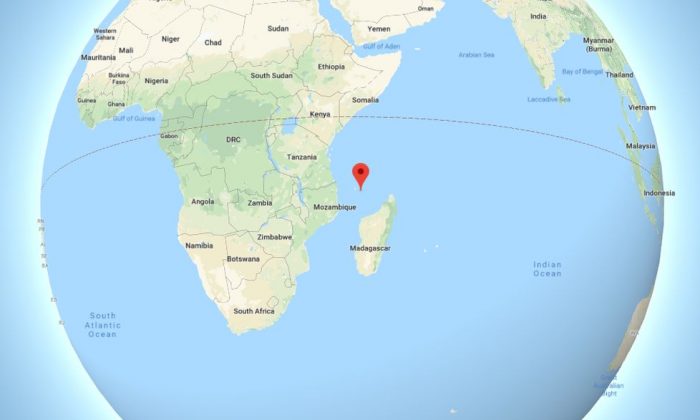 Researchers say they’re puzzled by rocks found on a small island between Madagascar and the east coast of Africa. (Google Maps)
By Jack Phillips

Researchers said they’re puzzled by rocks found on a small island between Madagascar and the east coast of Africa.

The rocks, quartzite, were found by researchers from Columbia University in New York. Quartzite is a type of rock “composed almost entirely of quartz” and “forms when a quartz-rich sandstone is altered by the heat, pressure, and chemical activity of metamorphism,” according to Geology.com.

But researchers said that it shouldn’t be on Anjouan Island, which is part of the Comoros Islands, located in the Indian Ocean.

Impossible discovery found on remote island off African coast: A 'lost part of the world' #FNTech

“A mass of pure white quartzite, apparent remains of a river or beach deposit formed on some faraway, long-ago continent … is not supposed to be there,” reads a blog post from Columbia University.

Cornelia Class, a geochemist at Columbia University’s Lamont-Doherty Earth Observatory, said that quartzite shouldn’t be on a volcanic island.

“This is contrary to plate tectonics,” said Class. “Quartzite bodies do not belong on volcanic islands.”

The rock makes up about a half of a mountain on Anjouan. The island itself formed due to volcanic eruptions, according to geologists.

“All those years, it has bothered me that I didn’t understand how those rocks got there,” Class told Live Science.

Class said that Anjouan is the only island in the world that was formed by volcanism that also contains a piece of a continent.

According to the blog post, “Quartzite starts out as a type of the sedimentary rock sandstone, made of pure quartz sand grains collected in a river delta. When further buried and compressed, the grains fuse together, metamorphosing into extremely hard, dense quartzite.”

It added that it “could not have formed on Anjouan, because the basalt that formed the island does not contain any quartz. Even if it did, Anjouan’s terrain is too young and steep to have ever formed much of a river delta; its streams rush through chasms down the precipitous slopes to its cobbled shores.”

Researchers said that Anjouan’s quartzite is likely quite old. The island is believed to have appeared about 4 million years ago.

“How did a mass of continental rock travel many miles, and survive for millions of years far from its home, then manage to rise up inside an erupting volcano?” the post asked.

Class said that more research is necessary to determine how it got there.

“This is what nature presents, sometimes,” she said, reported Live Science. “It’s something we consider impossible, but then we find it, and once we find it, we have to explain it,” she said.

New vegetation and a mysterious, sticky mud were found on one of the world’s newest islands, located in the Pacific Ocean.

NASA said it is the first island of its kind that has formed since satellites began taking pictures of Earth on a regular basis.