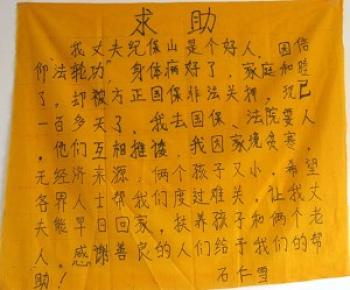 A woman from Fangzheng County writes her appeal on a piece of yellow cloth as she begs for food with her infant after her family was torn apart by persecution. (The Epoch Times)
China

Begging is commonplace in many places in China and few people take much notice of it. However, a mother-daughter duo on the streets of Fangzheng County in Harbin City of Heilongjiang Province draws an unusual amount of attention. These two not only have plainclothes police watching their every move, but also have police vehicles' sirens disrupting them.

These beggars are the wife and two-month old daughter of Ji Baoshan, a Falun Gong practitioner who was taken away by police over three months ago. Because Ji was the sole source of income for his family, his wife, Shi Renxue, was focused to take their infant out onto the streets with her to beg for food and appeal for his release.

On the afternoon of January 11, 2009, a group of police led by deputy chief Zhao Jiaqi from the Fangzheng police station rushed into Ji’s home located in a rural area about 30 miles away from Fangzheng. The police ransacked Ji’s home and arrested and handcuffed him as soon as Ji returned home from work.

During the house search, Ji’s two-year old son cried nonstop. When villagers heard the commotion and went to check on the boy, policeman Wan Linchun cursed at the neighbors and locked them out.

A Household Loses Its Source of Income

Shi Renxue was a homemaker and relied on her husband’s migrant work for their livelihood. After Ji was detained, Shi and her two-month old daughter and two-year old son were left in straitened circumstances. Shi resorted to leaving her son at his grandparents’ home and took her daughter to the Fangzheng police station to ask for her husband’s release on January 13.

A week after her initial contact with the station, the commission chief Lu Tongjin finally allowed Shi to see her husband on the condition that she was to get Ji to sign a “guarantee statement.” The statement would assure that Ji would be released if he no longer practiced Falun Gong. Ji maintained that he had done nothing wrong and refused to sign the statement.

On the ninth day of the lunar calendar, over a dozen villagers went to the Fangzheng police station to demand Ji’s release. A few days later, the villagers collected over 40 signatures for a petition requesting Ji’s release and acquittal. The police station only replied that if Ji does not sign a guarantee statement, he would not be released.

Whenever Shi is in public with her daughter, they would be followed and monitored by plainclothes police. Police also frequently disrupt her activities by sounding the sirens on their vehicles. On many occasions, they have gotten out of the vehicles and threatened her.

Commission chief Lu and other officers have ordered her to the police station when they saw her on the streets. Lu threatened to take away her child and detain her.

On another occasion, the deputy captain Bai Wenjie forced Shi to leave the streets. He told her, “I officially arrest you. You’re coming with me to the station!”

Ji is currently still detained at the First Detention Center in Fangzheng. Shi is continuing to appeal for his release on the streets.