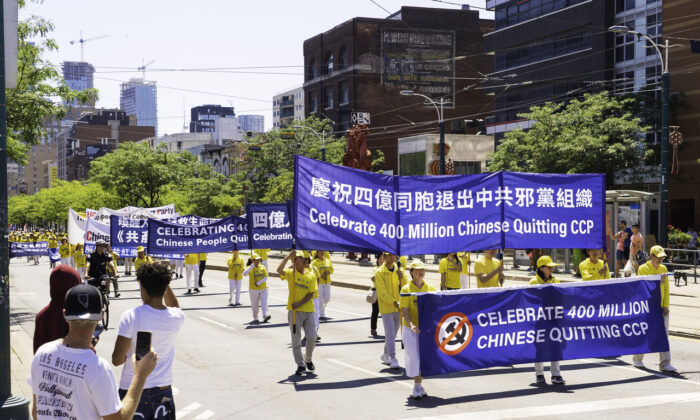 Residents look on as hundreds of people march in a parade to celebrate 400 million Chinese people quitting the Chinese Communist Party and its affiliated organizations, in downtown Toronto on Aug. 6, 2022. (Evan Ning/The Epoch Times)
Canada

Conservative MP Garnett Genuis has voiced support for the movement of Chinese people cutting their ties with the Chinese Communist Party (CCP), as the number of people who have withdrawn from the Party and its affiliated organizations recently hit the milestone of 400 million.

“I strongly support the right of people to choose to voluntarily disassociate themselves from the Chinese Communist Party,” the MP for Sherwood Park-Fort Saskatchewan told The Epoch Times.

“Given the escalating violence and repression that the Party is responsible for, increasing disassociation is entirely unsurprising.”

Genuis’s comments come after the Global Service Center for Quitting the Chinese Communist Party announced on Aug. 3 that the number of Chinese people who have renounced ties to the CCP and its affiliated organizations had reached 400 million.

While the CCP claims to have over 95 million members as of 2021, most Chinese citizens are required early on in their childhoods to join its affiliated bodies—the Young Pioneers (YP), for elementary and middle school-aged children, and the Communist Youth League (YL), for middle and high school-aged youths. Such requirements are mandated as children enrol in almost all schools across China.

As people advance through the three CCP organizations, their pledge evolves from “contributing to” to “fighting for” and, eventually, to be “ready to sacrifice everything for” the Party.

“The right to freedom of association is a fundamental human right. Canadians are guaranteed this right by our constitution, freedom of association is enshrined in the Universal Declaration of Human Rights, and the Chinese government purports to respect this right as well. Sadly, universal human rights and freedoms are not recognized or honoured by the Chinese Communist Party,” said Genuis, who is the Shadow Minister for International Development.

Knowing that the CCP doesn’t allow Chinese people to actively renounce their Party membership, and would even retaliate against those who do so, the Global Center has been helping the Chinese to disassociate with the Party using aliases.

Quitting the Party, or “Tuidang” in Chinese, is one of the largest grassroots movements in Chinese history. It began in 2004 after The Epoch Times published the “Nine Commentaries on the Communist Party,” a book that illustrated the history of the CCP and its crimes against the Chinese people.

Since the CCP established the People’s Republic of China under its one-party rule in 1949, an estimated 60 million to 80 million Chinese people have died of unnatural causes, according to the Nine Commentaries. Many perished under the regime’s political movements, including in the ongoing persecution of adherents of the spiritual practice Falun Gong, the imprisonment of millions of ethnic minorities in Xinjiang and Tibet, and the clampdown on democracy in Hong Kong.

Canadian human rights lawyer David Matas noted that, unlike in democratic countries where elections are regularly held to reflect the public interests, political elites in China “rule by force,” and “their power-seeking and maintenance tools are propaganda, censorship, coverup, nepotism, and compulsion.”

The CCP has relied on these tools to prop up its tyrannical rule over China for the past 74 years, but the people need just one to dismantle this oppressive system, according to Matas.

“The people of China do not need to overthrow the Communist Party to achieve liberty. All they have to do is walk away from it. If enough people quit the Party, the Party becomes an empty shell and its power will be gone.”

Matas, a co-founder of The International Coalition to End Transplant Abuse in China, exposed the CCP’s horrendous crimes of live organ harvesting on adherents of the spiritual practice Falun Gong in 2006.

Also called Falun Dafa, the practice involves meditative exercises and moral teachings of “truthfulness, compassion, tolerance.” First introduced in China in 1992, the practice quickly attracted 70 to 100 million adherents by the end of the decade, according to Chinese official estimates. But former CCP leader Jiang Zemin perceived Falun Gong’s popularity as a threat to its totalitarian rule, and on July 20, 1999, launched a brutal persecution campaign aimed at eradicating the practice.

In this process, the Chinese regime has turned the life-saving therapy of organ transplantation into an organ harvesting and trafficking industry, using the organs forcefully taken from Falun Gong practitioners and other prisoners of conscience.

This, however, could lead to the CCP’s own sudden demise, Matas said.

“There are events which could precipitate a collapse of the Party even earlier,” he said. “One is the killing of prisoners of conscience for their organs. The abuse is so awful and indefensible that the widespread knowledge within China that the Party is responsible could lead to its collapse almost immediately.”

“Over time, more and more people come to appreciate the existence and extent of the atrocity and the falsity of the denials. Over time, leaks in the system of censorship have a cumulative effect. The mass killing of Falun Gong for their organs is a string which, pulled on long and hard enough, can unravel the Party rug which blankets China.”

Canada’s former Minister of Justice and Attorney General Irwin Cotler recently condemned China for its continuous attacks against Canadian citizens and the international rule of law. In his opinion piece, Cotler highlighted the list of Canadians who are victims of the Chinese communist regime.

Some high-profile cases include Michael Kovrig and Michael Spavor, who until last September, were held in Chinese prison and deprived of access to family, counsel, media, and an independent judiciary. The two men were detained in December 2018, days after Canada arrested Meng Wanzhou, senior executive of Chinese telecom giant Huawei, under a U.S. warrant to have her extradited for alleged bank fraud.

Canadian Sen. Leo Housakos said he “agree[s] wholeheartedly” with Cotler that “it’s long past due for our government to accept that there is no normalizing of relations with an out of control authoritarian regime like that in Beijing.”

“It’s time for our government to do more than just express concern over the CCP’s increased aggression,” he said.

Housakos called for parliamentary support for several bills, including Senate Bill S-204, S-211, S-237, and S-247, to create a reporting mechanism that allows the public to hold companies accountable if they are complicit in the use of forced labour in the manufacture of goods, which could be used to sanction China for its genocide against the Uyghurs in Xinjiang and persecution of other minorities groups.

“We have the tools available to us to do more than just stand by. The question is, does the current government have the will?” he said.