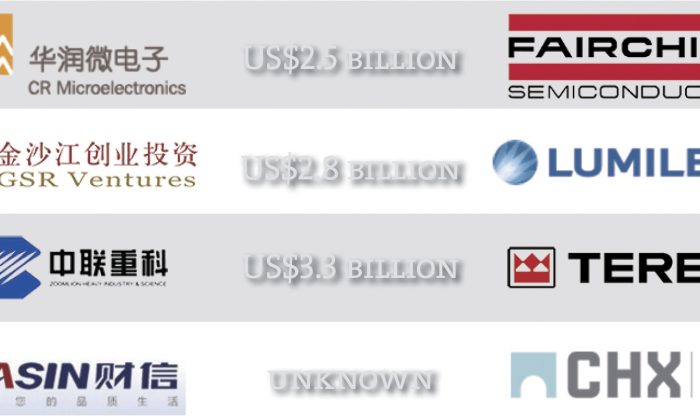 Chinese companies have recently encountered setbacks while trying to takeover major overseas businesses. Most of these Chinese companies are being probed, in one way or another, in the anti-corruption campaign led by Chinese leader Xi Jinping.

On Feb 18, 2016, the Financial Times reported that two takeovers involving Fosun International, one of China’s most acquisitive private conglomerates, and state-backed China Resources, collapsed in the space of a day.

Fosun announced on Feb 16 that it was terminating a deal in which it would have bought a controlling stake in Phoenix Holdings, an insurance and financial group, from Israel’s Delek Group. Fosun declined to comment on whether it had run into regulatory concerns in Israel.

The U.S. government is uneasy about Chinese control over critical industries and concerned about the backgrounds of the Chinese investors, especially if they are under the corruption probe.
— Andy Kwan Cheuk, economist

Fosun has been caught up in the anti-corruption drive. Its chairman, Guo Guangchang, ranked the fourth richest man in China, disappeared from public view last December.

According to Business Sohu, Guo was on close terms with Shanghai’s vice-mayor, Ai Baojun, who was placed under investigation on Nov 10 last year. It was also reported that Guo had sold a property cheaply to Wang Zongnan, the former chairman of state-owned Bright Food Group.

Wang was a close friend of former Chinese Communist Party leader Jiang Zemin and his son. Guo is thus believed to be close to officials from the Jiang faction of the Party.

Andy Kwan Cheuk-chiu, an economist, believes Fosun’s acquisition setback might be due to its aggressive acquisitive ambitions, which put the authorities on the alert.

On the same day, Fairchild Semiconductor International also rejected a US$2.5 billion takeover offer from China Resources and instead embraced a smaller bid from ON Semiconductor, an American company.

According to the New York Times, Fairchild’s worries about the likelihood of approval from the Committee on Foreign Investment in the United States (CFIUS) outweighed the attractiveness of the bid.

China Resources was also hit by the anti-corruption probe in 2014. The former chairman of the state-owned conglomerate, Song Lin, was sacked for corruption, and many personnel at the senior management level were either replaced or arrested, leading to a plunge in share prices.

Song was reported to be on close terms with ex-Politburo Standing Committee members Zhou Yongkang and Zeng Qinghong, both members of the Jiang faction.

In January, the company Philips announced that it had abandoned its plans to sell its LED business, LumiLEDs, to GO Scale Capital, a Chinese led group, for US$2.9 billion due to objections from the CFIUS.

Zheng Jianming, chairman and founder of Asia Pacific Resources Development Investment, who was involved in the bid, is said to be close to Che Feng, son-in-law of former central bank governor Dai Xianglong.

Kwan believes there are many reasons Chinese companies are meeting setbacks in their attempts to stretch their arms overseas. The U.S. government is uneasy about Chinese control over critical industries and concerned about the backgrounds of the Chinese investors, especially if they are under the corruption probe.