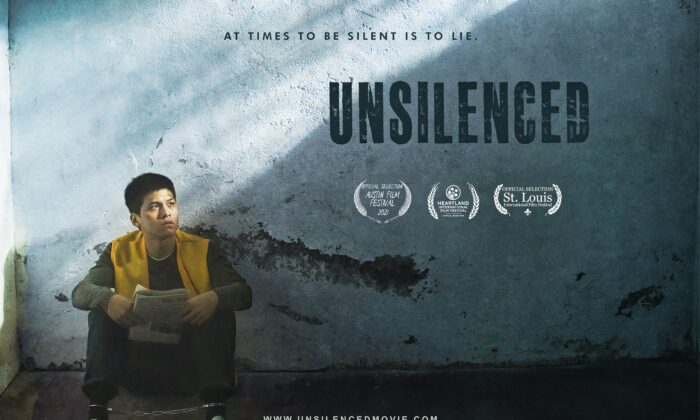 A movie poster for the feature film "Unsilenced." (Provided by the "Unsilenced")
Film & TV

The festival is one of the largest cinema and television screenwriting events in the United States.

“Unsilenced” is based on the true story of two young couples who were students at China’s Tsinghua University. Together they helped a western journalist break through the Chinese Communist Party’s (CCP) surveillance and obstruction apparatus to expose its draconian persecution of Falun Gong adherents.

The students pay a heavy price, but their courage had a lasting effect in countering Beijing’s well-oiled propaganda machine.

“This film is not just about depicting human rights abuses in China and how Chinese citizens stand up [against the regime] to spread information, it is also about the fierce battle between truth and lies, which takes place not only in Mainland China,” the film’s director, Leon Lee, said in an interview.

“Questions about what is ‘truth,’ how to seek out ‘truth’ and what are the values of ‘truth’ are also of great concern to people in modern western societies,” he said.

Lee is Chinese-Canadian and has dedicated much of his filming career to human rights issues in China. His Peabody Award-winning film, “Human Harvest,” exposes the CCP’s illegal organ trade based on the murderous organ harvesting of prisoners of conscience such as Falun Gong practitioners and minorities like the Uyghur Muslims in Xinjiang.

Falun Gong is a spiritual practice that includes meditation, exercises and teachings based on the values of truthfulness, compassion and tolerance. Also called Falun Dafa, the practice was introduced in China in 1992 and gained widespread popularity due to its benefits to the mental and physical well-being of its practitioners. By 1999, according to official Chinese government estimates, it had attracted an estimated 70-100 million adherents.

Jiang Zemin, the Chinese leader at the time, considered Falun Gong’s popularity a threat to the regime’s rule and launched a brutal campaign in July 1999, aimed at eradicating the practice. Several million Falun Gong adherents have since been arbitrarily detained with an estimated 1.5 million to 2.5 million imprisoned in labour camps in 2010 alone, according to figures from the Falun Dafa Information Center.

“Unsilenced” stars Sam Trammell, a Tony Award-nominee and Anastasia Lin, a human rights advocate and winner of the Miss World Canada title in 2015.

The Austin Film Festival is an Oscar Qualifying Film Festival that is known for its encouragement and support for screenwriters. Participants in the festival included Joel and Ethan Coen, who are prominent figures in the independent film industry, and the renowned American director Ron Howard.

The festival’s organizers reported that they received over 6,000 entries this year from which they selected roughly 130 finalists.