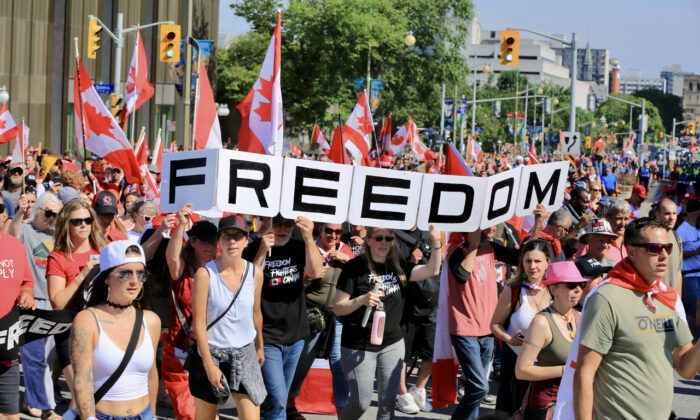 The large number of police deployed in Ottawa during the Canada Day celebrations impeded Canadians’ freedom of speech and expression, said two lawyers who came close to being fined for displaying a banner on the sidewalk near Parliament Hill.

Adam Blake-Gallipeau, a lawyer from the legal charity The Democracy Fund, said he found an unusual focus on the enforcement of bylaws on “petty” issues that wouldn’t have needed the heavy police presence seen in Ottawa during the national holiday, which he said was “over the top.”

“Instead, what they got was what looked like a police occupation of several blocks in front of Parliament.”

Blake-Gallipeau and his colleague, Mark Joseph, headed to Ottawa on July 1 as “Charter scrutineers” to observe how officers with the Ottawa Police Service (OPS) enforce bylaws, after learning the city had increased fines for certain behaviours ahead of the national holiday, particularly in respect to “unnecessary noise” and “shouting,” as outlined in a statement issued on June 29.

They were standing on the sidewalk near Wellington and Metcalfe streets with a banner that displayed information about their organization, The Democracy Fund. At around 5:30 p.m., a group of five to six police officers approached them and asked them to remove their banner within five minutes or they would be given a $1,000 ticket.

Blake-Gallipeau said the banner wasn’t a fixture, which would require a permit to be installed, and that he and his colleague weren’t obstructing others’ passage on the sidewalk. The police, however, insisted on enforcing the bylaw and requested the lawyers to keep their banner off the ground and moving, which they did.

“It was unsettling,” he said.

“The last I checked, we still had freedom to assemble, freedom of speech, and freedom of expression in this country. But in Ottawa on Canada Day, it didn’t seem like that at all.”

BREAKING: Our lawyers were just threatened with a $1000 bylaw ticket for displaying this banner in downtown Ottawa on Canada Day. pic.twitter.com/QHDa17ilwf

Joseph said their interactions with the police reflected a conflict between the government’s wish to maintain public order and the people’s rights to their freedoms.

“There’s always a tension between free speech and freedom of assembly and bylaws and permitting for demonstrations and parades and protests,” he said. “Generally speaking, I don’t think the government can say, ‘Well, you have free speech, but it only applies when you get a permit.’ That’s probably not going to be acceptable to a court.”

He also noted that while the police have discretion about when to apply bylaws, they would often do so in favour of the public interest during a protest or gathering, unless the event posed a danger or an obstruction to the public.

Joseph also pointed to a separate incident that day at the national capital where a man was given a $1,130 fine for writing “Free Tamara Lich” on the street using chalk.

Lich was a key organizer of the “Freedom Convoy” protest earlier this year calling for an end to the federal COVID-19 vaccine mandate and other pandemic-related restrictions. During the three-week demonstration, a large number of trucks and protesters camped in Ottawa’s downtown core until the Liberal government invoked the Emergencies Act on Feb. 14, giving the police additional powers to clear what they said was an “illegal demonstration” in an escalated operation over a few days.

When asked by The Epoch Times about the two incidents, the OPS declined to comment, and instead referred to a news release issued on July 5 regarding major police operations for five days, from June 29 to July 3. The release didn’t mention either incident, but noted that a total of 12 people were arrested and 50 criminal charges were laid during that period.