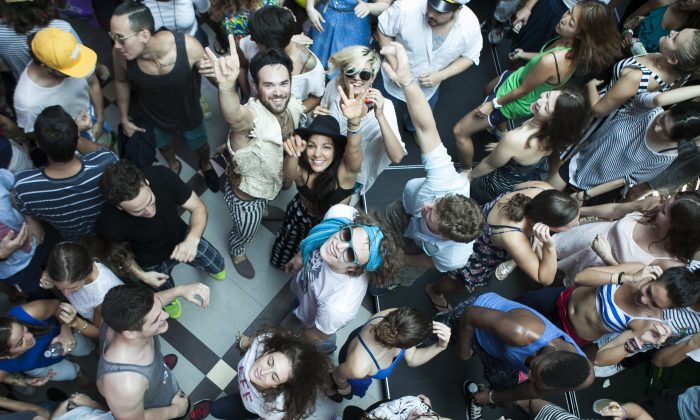 People take part in the Daybreaker dance party on a boat in in New York in the morning before going to work on Aug. 6, 2014. (Samira Bouaou/Epoch Times)
News

NEW YORK—A high-energy, two-hour dance party on a boat that starts at sunrise on a weekday does not sound appealing. Unless it’s a Daybreaker party. The semi-underground events—which are spread only through word of mouth, Facebook, and a private email list—are pure fun.

“Who doesn’t want to go on a boat at 6 a.m.?” quipped Ashley Ziegler, 26, who lives in Astoria and woke up at 4:15 a.m. to be there. Her friend, Alexa Savitz, 29, said her first Daybreaker in Manhattan’s Meatpacking District sold her on going again.

“It felt like I’d been partying all night; it was cool coming out of this club and everyone was bustling to get to work,” said Ashley, who added that the best part was the impact afterward. “I had a positive outlook on the rest of the day. I had a lot of adrenaline and a buzz.”

It’s not hard to see how that’s possible.

Daybreaker has dubbed itself a “morning movement” that literally gets people moving and dancing, but also aims to create a movement among those with common goals. Founded by Matt Brimer, who is also co-founder of global education institution General Assembly, and Radha Agrawal, founder of story-driven nutrition program Super Sprowtz, the goal of all Daybreaker parties is to “promote health and wellness, true human connection, and appreciation for the arts and music,” according to organizers.

For now, the parties happen two to three times a month in each city where they run: San Francisco, London, and New York. New York’s Manhattan parties are always on weekdays, while weekend parties in Brooklyn are geared toward families and held in the early afternoon.

Other cities on the organizers’ radar for future parties are Atlanta, Chicago, and Barcelona.

“Initially this was just friends of friends; very, very tight-knit, very underground,” said operations manager Harrison Luliano by phone last week. I wanted to know more about what Daybreaker was trying to prove.

Just five minutes into our conversation, I was intrigued. Five minutes later, I was truly surprised by the positive goals. By the time we hung up, I was as amped up about going to my first Daybreaker party as I used to get about going to clubs back in college.

I wasn’t the only one. On a Wednesday morning at 6:30 a.m., nearly 800 people boarded a boat at Manhattan’s Pier 40 for Daybreaker’s first-ever boat dance party. True, the people there were largely 30 years old and younger and mostly in great physical shape, but the atmosphere was totally absent of any judgment and the often sleazy vibe that is part and parcel with a nightclub. There are no drugs or alcohol at Daybreaker parties, just coffee, fresh juice, energy bars, and water.

Amy Dewhurst, a representative for lifestyle magazine and nutritional supplement supplier Aloha, said her company sponsors Daybreaker events because of a shared common vision for health and well-being.

“Choosing to wake up and dance in a clean, vibrant, energized environment with like-minded conscious individuals affects your consciousness and everyone around you in a positive, exponential way,” said Dewhurst.

Most people came with a group of friends; some wore crazy, colorful costumes, while others were dressed in business attire for a day at the office.

What, I wondered as I watched happy people fill the boat, chatting and laughing, would motivate so many New Yorkers to do something so crazy?

The vibe of a Daybreaker party is as inclusive as it is hilarious and entertaining. At my party, throngs of people danced with an energy and intensity I have only seen at World Cup viewing parties. Some of them kept at it for the entire two hours that the boat cruised around the Manhattan shoreline. Though the party started off with a soothing mini-yoga session, it was mostly dominated by music, with a DJ and some live instruments, including a trumpet. They kept the music playing loud and long until 8:30 a.m. Frequent cheers, whoops, and screams of delight could be heard in the boat and on the deck.

It was so raucous, I wondered if anyone on shore could hear the party.

“From the beginning we wanted to curate the community,” said Daybreaker’s Harrison of the type of crowd they draw. “We really want to be the antithesis of the nightclub scene, which is [a lot about] over-glorified DJ’s and drunken, drugged out people who aren’t dancing.”