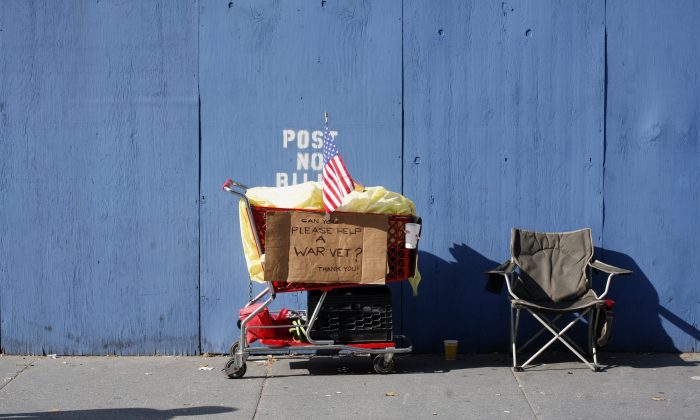 Unseen City: The Struggling Among Us

NEW YORK—It’s become an obvious part of life in New York that there are many mentally unstable people populating various nooks and crannies of the city. They beg for cash on the trains, even a nickel or penny. Whatever you can spare.

They are huddled in the filthy, cold stairwells of subway station entrances and along the sidewalk’s edges, telling sad tales of woe inscribed in black marker on crude cardboard signs. They roam the streets, camp out on subway benches and on moving trains, and yell unintelligibly. They could be our neighbors who we meet at the corner store.

Many of these mentally disturbed people end up in jails, like Jerome Murdough, a homeless veteran incarcerated at Riker’s Island for trespassing. He died of overheating in his cell. Murdough’s undoing was a lethal combination of malfunctioning heating equipment that pushed the temperature over 100 degrees, and psychotropic medication that makes it harder for the body to sweat and cool itself down.

A day earlier, the New York Times reported alarming Department of Correction statistics. The number of diagnosed mentally ill inmates at Riker’s Island has doubled in the past eight years. Today, they make up 40 percent of inmates.

We are, it seems, becoming a city of madmen.

The problem with all of these characters is they can be frightening, despite the fact that they probably need help and support.

While out with my family last weekend in Midtown Manhattan, we passed a homeless veteran. Nationally, over 1.3 million veterans got treatment for a mental health problem from the U.S. Department of Veteran’s Affairs in fiscal year 2012. The number has risen yearly from 927,052 in 2006.

I don’t know if this veteran was mentally ill—in fact, I know nothing about his story except what I saw in that brief moment. But it left an indelible memory.

The man sat on 42nd Street and Sixth Avenue with a rough blanket around him and a sign that said he was a veteran, as throngs of people streamed past.

On either side of him, hovering like guardian angels, were two other men. Each had a protective hand on the man’s back and they were bent over, speaking softly and calmly. I couldn’t hear a word they said, but I felt their genuine concern for him as a fellow human being.

What captivated me most of all in that scene was the homeless veteran in the middle. He sat there with his head down and was calm, quiet, and perfectly still, listening to every word from the caring strangers. They formed their own beautiful scene showing an admirable human trait: the ability to give, as well as receive.

I thought to myself: What if each of us cared about others in that way? And what if that care was welcomed and taken at face value? Perhaps our city and its jails wouldn’t be teeming with the mentally unstable if there was more support to keep them from falling off the precipice.

Maybe all we need, as the Beatles’ song so aptly said, is love.