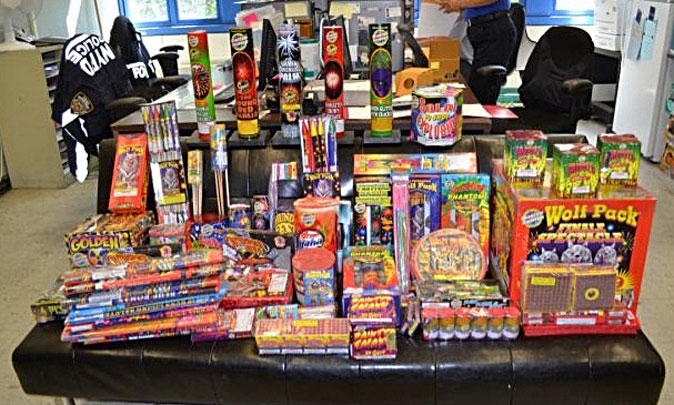 A large assortment of illegal fireworks is displayed on a table in New York, July 3, 2013. The fireworks valued at $1,600 were seized when police arrested two individuals in the Bronx borough of New York who were trying to sell them on Craigslist. (AP Photo/New York Police Department)
News

Oh, fireworks, magical fireworks. Picture yourself, sitting on a blanket on the grass on a warm summer night amid hundreds of others as lovely cascades of color explode in the black night sky. A cacophony of oohs and aahs rises and falls with each and every display—sometimes, there is applause or delighted screams of joy.

What simple, unimpeded joy. What a wonderful tradition that connects us to our heritage and our childhood. Every Fourth of July explosion reminds us of the freedoms we are so lucky to enjoy.

Unless you live in New York City.

As is the case with many otherwise simple pleasures, this town knows how to take fireworks and turn them into the third act of a Broadway play.

Picture yourself at home on a warm summer evening just a few days before the Fourth of July proper. The children are in bed, dreaming of your planned family outing to Brooklyn Bridge Park to see the fireworks. How lucky the holiday falls on a Friday this year!

As you sit down with a cup of tea to watch your favorite late-night comedy show, a contented sigh of anticipation of the coming festivities is shattered by a massive explosion.

“What was that?!” you yell to your husband as you cringe from the hot tea you just spilled on your hand. You have a fleeting thought that the children might wake up.

“Just some fireworks,” he replies, unconcerned.

Then you have another fleeting thought: What if it was a gunshot?

You know from watching the news that shootings are no rarity in this town. You spend the rest of the night fretting over every explosion, and as the week wears on you realize, it’s only getting worse. Welcome to the real Fourth of July. It’s rough out there.

People who didn’t grow up in the United States may not realize that steadily increasing fireworks battles leading up to the Fourth that culminate in all-out war is a fairly typical part of American life. Some might even go so far as to call it “Americana.”

The police aren’t overly fond of fireworks, which in most towns and cities have been deemed illegal. The rationale for that rule is something to do with safety. Truth be told, though, back home when it comes to contraband fireworks the craziest maniacs always find a way not only to get them but to blow them up. And back home is small town America.

This year, the New York City Police Department has set upon this city’s crazy maniacs in advance of our Independence Day by arresting folks who use illegal fireworks. They call it a crackdown. But there’s one problem: crazy will always find a way. It’s impossible to, overnight, stamp out the instinct to ignite explosives in the driveway. It’s taken generations to cultivate, and we’re proud of it.

If the NYPD really wants to stop people from causing potential bodily harm and property damage, one idea is to stop arresting offenders and start joining in the fun. If things do go sideways, then the authorities will be there to save the day.

The most important thing to remember about the Fourth of July is a simple, immutable fact. You just can’t tell Americans what to do.