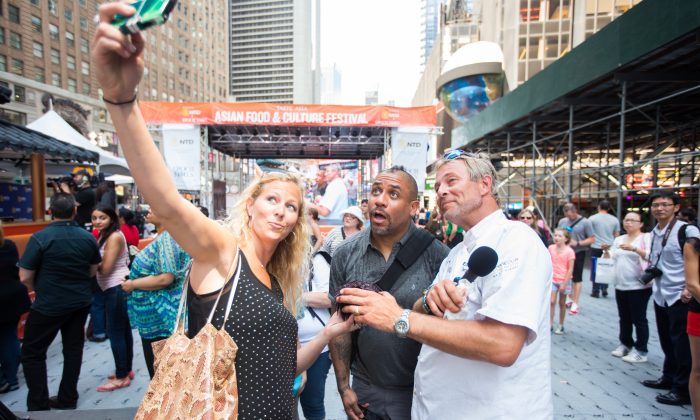 Celebrities or even world leaders are in on the act. (Edward Dai/Epoch Times)
Life & Tradition

It was the “selfie” seen around the world. During the 2014 Academy Awards, host Ellen DeGeneres pulled a stunt that started a global epidemic of people taking “selfies” (self-taken photos) with their cell phones. She rallied a group of A-listers in the first few rows–including Julia Roberts, Jennifer Lawrence, and several others. As they swarmed in to pose, actor Bradley Cooper gamely offered to take the photo (which included him of course).

Ellen tweeted the photo right on live television from the Oscars. The ensuing bajillion retweets made Twitter crash. Worse, though, was that it inspired people already addicted to their smartphones (you know, the ones who look at screens even while crossing the street) to follow suit.

Even world leaders are in on the act. Even President Barack Obama took the fad to a new level when he posed for a group selfie at Nelson Mandela’s memorial service with British Prime Minister David Cameron and Denmark’s Prime Minister Helle Thorning Schmidt. The First Lady abstained with great disapproval.

So it shouldn’t have come as a shock to see a group of mature, well-dressed women with a baby stroller pause at a West Village crime scene for a group selfie earlier this week. It wasn’t just any crime scene, though. Two U.S. Marshals and an NYPD detective got caught up in a gunfight with one of America’s most wanted criminals. The crime fighters had non-life threatening injuries, but the perpetrator–a man facing multiple accusations of child molestation–was left dead.

Yet the women blithely posed with two smartphones, smiling as though they were on the vacation of their lives. It was a shock to watch, and almost sickening when they immediately sent the photo out into the ether. At first I thought they must not understand the context of where they had taken the picture. But on second thought, the copious amounts of “police line do not cross” tape, the gawking crowd, the dozen or so police vehicles, and the 50 journalists inside the reporters’ corral were exceedingly obvious that all was not normal on this West Village street.

At first, I wanted to take their picture for proof of yet another example of moral decay fed by what happens to be my favorite social media tool, Twitter. But then a few recent similarly disturbing instances came to mind: a selfie taken by a woman with a man about to jump from the Brooklyn Bridge perfectly, intentionally framed in the background, and a selfie of a grinning young girl at Auschwitz that she posted online.

The girl at Auschwitz claimed she was just happy because it was deeply meaningful for her to be at the former Nazi concentration camp where thousands were murdered. The woman at the bridge had no defense when confronted by a reporter.

Whatever the case, it seems that the trend had already become a new, socially acceptable norm. The whole thing got me thinking, though, about our obsession with ourselves. Sometimes that obsession can even take over at highly inappropriate, tragic, or deadly moments. It’s as though the filter for “appropriate response when someone is dead or close to dying” is optional.

Perhaps what should be optional, instead, is taking the photo.