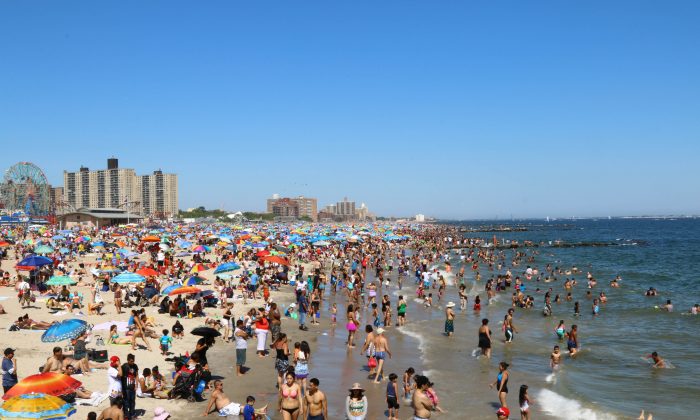 Over the Fourth of July weekend, I convinced some family members that a trip to sunny Coney Island was just the ticket for a fun day. We could have a hot dog at Nathan’s, cruise the boardwalk, and go to the aquarium. As it turned out, I ate chicken, the boardwalk was a harrowing search for shade, and we didn’t make it to the aquarium.

Nonetheless, it was pure fun (and sunburn), just as it has been for more than 100 years.

Along the way, we took in some of the wonders that this lovely spot on Brooklyn’s southern shore has to offer. The carnival rides, ice cream, questionable boardwalk karaoke (can something be so bad it’s good?), the miles of rainbow beach umbrellas, and the white sailboats dotting the horizon. Every type of person seemed to be there, mingling with the salty sea air that was strangely tinged with the smell of beer.

There were fishermen—the old and young, the fat and skinny—musicians, bikers, cops on segways and in cool sunglasses, and even a midget wearing a shirt that said, “think big” on the back. Food for thought: I would wager that it’s the only place in the city where a man can feel free to let his generous midriff hang out, sans shirt.

So there’s no doubt about it that Coney Island is a bit strange—but in a very nice way. The draw, however, seems to differ for everyone.

The Attraction
“We’re crazy photographers,” said Marianka Campisi, 30, when asked why she enjoys the oceanside destination. Originally from Italy, Campisi and her husband live in Minneapolis. As they stood on the pier photographing the shoreline with its beach bodies and umbrellas as far as the eye could see, she described Coney Island in a nutshell.

Just down the pier, crusty fishermen with cigarettes dangling from their mouths cast lines, waiting for the catch of the day. Apparently, they are out even in the bitter cold.

“Summer’s okay, winter’s kinda cold,” noted a blasé Ricky Nieves, 46. According to Nieves, he and his fishing buddies can catch a variety of fish from their perch above the Atlantic Ocean. In the winter they get mostly herring, but the summer is a smorgasbord. He said they see sand sharks, fluke, sea robin, and more. The biggest catch he ever had was a two-foot bass.

The surprising part for me: they eat what they catch.

“So far as I know, nobody has ever died from eating fish here,” said Nieves. “You know something I don’t? Please tell me!” If you’re reading this, Mr. Nieves, the New York State Department of Health says it is safe to consume up to four meals a month from fish caught in those waters.

Others just love to be in Coney Island for the chance to commune with nature.

“I like that it’s in the city, and you don’t have to go far outside of the city,” said Esther Lee, 26, from New Jersey.

Her companion, a 29-year-old tattooed environmentalist by the name of Tristan Jones said it best of all.

“I really didn’t want to be in a museum today.”