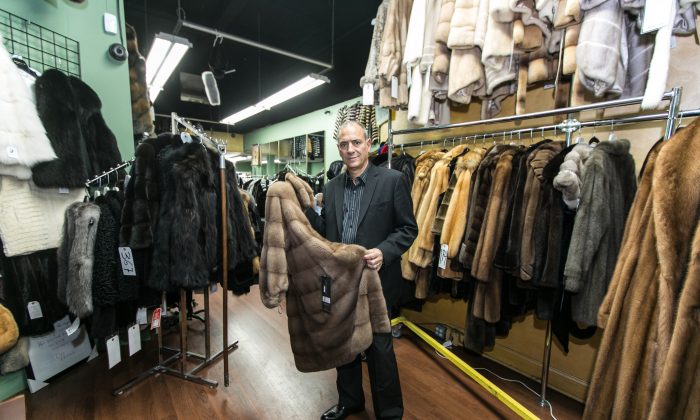 NEW YORK—American consumers are reaching out for T-shirts instead of sweaters this holiday season due to the unseasonably warmer weather.

The United States has experienced upside-down weather patterns, with above-average temperatures in the Northeast, tornadoes in the South, and powerful snowstorms in the West.

New York has recently experienced fluctuating temperatures between the high-50s and mid-60s and is expected to be in the mid-60s on Christmas day.

I was going to buy some sweaters today and more jackets, but I changed my mind.
— Richard Verdoni

Consumers are delaying or forgoing their purchases on winter apparel and footwear, causing a buildup of stock for winter-specialty retailers and department stores in the past few months. Retailers may end up selling these goods at clearance prices during post-Christmas sales.

Christmas shopper Richard Verdoni, 47, said that the warmth has prevented him from buying winter apparel to bring back to California.

“I was going to buy some sweaters today and more jackets, but I changed my mind,” Verdoni said during a break from his shopping in front of Macy’s on 34th Street. “I thought it was going to be colder here, but it’s not really necessary.”

According to Planalytics, a consulting firm that helps companies assess how the weather impacts their business, winter specialty retailers lost around $185 million during November because of warm weather. Retailers have not seen any improvement in December. Well-known winter apparel retailers, including The North Face, REI, and Paragon Sports, did not respond to emails asking about their sales figures so far.

So far this holiday season, winter-specialty retailers have lost $421 million compared to the same period in 2014, Planalytics says. These retailers were unable to salvage their holiday season profit during the frantic pre-Christmas shopping period.

Fred Fox, CEO of Planalytics, said people are still spending money on gifts, but warm-weather goods won’t be among them. Instead they will be buying toys, jewelry, and electronics, which, the company says, have a comparatively lower profit margin.

He added that clothing stores in particular will be financially hit.

“Anyone heavily focused on soft lines, clothing, so any of the specialty stores, any of the department stores, are really hurting—especially stores in the East,” he told Fox Business.

George Sideris, owner of Not Just Mink, a fur specialty store on 30th Street in Manhattan, blamed the weather for a slight drop in business compared to last year.

In order to attract more sales, he has employed promotional tactics such as sending emails to previous customers and distributing flyers to potential buyers.

However, he is confident that the sales will balance out in the next couple of months. He said he has been doing business with tourists and Americans in colder states.

Like Sideris, other winter-specialty retailers are also not overly concerned.

On 29th street, Fur Warehouse manager Steve Lilikakis said the business has been around for 50 years. He believes that the numbers always end up being steady.

“For most furriers or outerwear businesses, the early part of the year is very strong. So at the end it’s probably going to end up being where the numbers normally are,” he said.

However, Lilikakis said compared to last year, there was less customer traffic.

“We should be busy, but we’re not. I mean we are still doing business, people are still purchasing outerwear but not in the quantities they used to,” Lilikakis said. “That’s more driven by the weather.”

While some specialty stores are not worried about the dip in sales, others may have to start offering more discounts to entice customers, according to Fred Fox, head of Planalytics.

“There’s going to be a really great buying opportunity for warm-weather merchandise,” he said, “especially in the early January time frame where you’re going to see discounts anywhere from 50 to 70 percent off.”