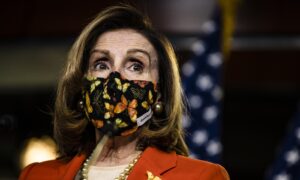 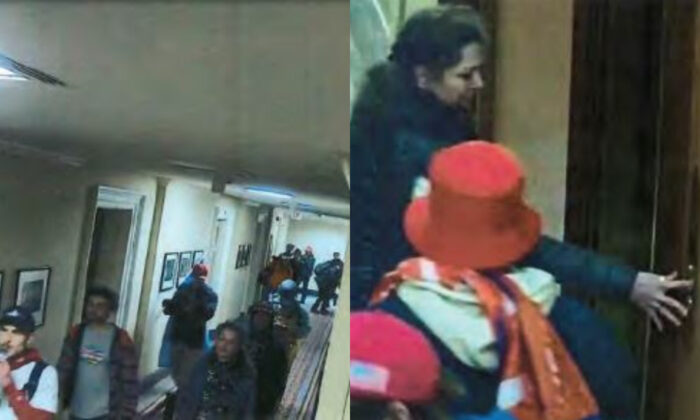 In these still images from surveillance footage, a woman the FBI believes is Marilyn Hueper is pictured inside the U.S. Capitol on Jan. 6, 2021. (FBI)
Constitutional Rights

An unsealed search warrant shows that the FBI raided a couple’s home in Alaska because agents believed one of them was involved in the theft of a laptop from House Speaker Nancy Pelosi’s (D-Calif.) office during the U.S. Capitol breach on Jan. 6.

But the couple say the FBI has the wrong person and that the bureau and other agencies are being weaponized.

The warrant, dated April 22 and recently made public, details how Paul and Marilyn Hueper came to the FBI’s attention. Both were identified as refusing to follow mask regulations on an Alaska Airlines flight in February and were banned from flying with the carrier in the future. About a week later, the FBI was contacted by a person whose name was redacted, described only as “witness 1.”

That person provided the FBI with an Instagram photo posted by Paul Hueper and claimed that a photo circulated by the bureau of a woman inside the Capitol during the breach was Marilyn Hueper. Agents reviewed surveillance video and concluded that Marilyn Hueper was part of a group that entered Pelosi’s office and took an HP ProBook laptop from a desk there.

Agents then successfully applied for a search warrant for the Huepers’ home in Homer, where they run an inn and spa.

The warrant authorized the FBI to seize the laptop if it were found on the premises, along with any other property believed to be stolen from the Capitol.

Agents raided the house on April 28.

Marilyn Hueper is at least the second person agents have claimed may be in possession of the laptop. They previously cited a tipster who claimed that Riley June Williams, a Pennsylvania woman, may have taken it with plans to sell it to Russian intelligence officials. But Williams’s friend told The Epoch Times that the tipster was an abusive ex-boyfriend who is from Russia, and court filings indicate that the computer hasn’t been found in Williams’s possession.

The Huepers say the woman spotted inside the Capitol is a different person. They say they were no closer than 100 yards from the building on Jan. 6.

“It’s definitely a case of mistaken identity,” Paul Hueper told The Epoch Times. “They had a very similar jacket, but the other woman had this really ugly Christmas sweater on, and Marilyn was just wearing a white, red, and pinstripe blue shirt, mostly white.

“Surely the FBI could see that, unless their investigative work is just that weak that they can’t pick up these small things.”

While the agents were allowed to seize electronic devices from the couple’s home, Marilyn Hueper says they also took a copy of the Declaration of Independence. That signaled to her that they’re “trying to say something or trying to intimidate.”

She urged people to educate themselves on what rights they have. The Huepers believe they gave up a lot of rights during the search because of a lack of understanding.

“We have to know how to hold them accountable, which means we have to learn what is lawful and what isn’t and put their feet to the fire,” she said.

Paul Hueper added: “It’s just really frightening, seeing our government weaponize different facets of these different agencies—the FBI, IRS, CIA, and so forth—against American citizens. This is the stuff of police state legends. This is where the USSR got formed and where Venezuela got formed and Cuba, and on and on down the line.

“So Americans don’t really realize where this ‘police state tactic’ kind of government is leading us, and I don’t care if you’re Democrat, Republican, if you’re independent, if you’re Libertarian—wake up Americans, your rights are getting taken away and they are slipping away fast.

The Huepers also contest the situation with Alaska Airlines, saying that Marilyn only had her mask off while eating and drinking, and that Paul had his mask on the entire time.

Alaska Airlines didn’t respond to a request for comment. The FBI declined to comment. No criminal charges have been filed against the Huepers as of May 7.