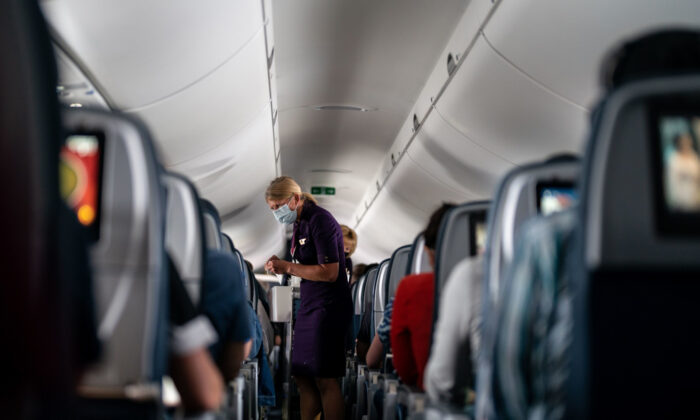 The Federal Aviation Administration (FAA) on Wednesday reported a sharp decline in unruly air passenger incidents just one week after a federal transportation mask mandate was vacated by a federal judge.

U.S. District Judge Kathryn Kimball Mizelle struck down the Centers for Disease Control and Prevention’s (CDC’s) mask mandate for airplanes and other forms of public transportation on April 18, saying the rule exceeded the agency’s statutory authority because its implementation violated administrative law.

The FAA said the average rate in the last three months of 2020 was 2.45 incidents per 10,000 flights. Some airline officials had predicted the number of unruly passenger incidents would fall sharply when the mandate was lifted.

The decrease in incidents also comes as former FAA administrator Steve Dickson implemented a “zero-tolerance policy” against unruly passenger behavior in January 2021. The policy has led to numerous hefty fines instead of warning letters or counseling that were used in previous policies.

Last month, the FAA said that its zero-tolerance policy will become permanent even after the mask mandate was lifted. The policy has decreased the rate of unruly passenger incidents by nearly 60 percent, the agency said in a statement.

“The FAA will continue to work with its airline, labor, airport and security and law enforcement partners to continue driving down the number of incidents,” it said.

Airlines had reported a high number of incidents since early 2021—more than 1,000 this year alone. About 70 percent of them involved passengers who refused to wear a mask.

Since January this year, the FAA has proposed approximately $2 million in fines, the agency said in mid-April. Among those civil penalties are its “largest-ever fines” against two passengers over alleged disorderly behavior on airliners.

About 80 unruly airplane passengers have been referred to the FBI for potential criminal prosecution.

In one latest case, a 23-year-old man who was restrained in his seat with tape after groping and assaulting flight attendants during a Frontier Airlines flight from Philadelphia to Miami last year was sentenced on May 3 to 60 days in prison.

Maxwell Berry of Ohio had pleaded guilty to three counts of assault and initially faced up to 18 months in prison. The incident was captured in cellphone videos that went viral, bringing attention to the risks faced by flight attendants due to a growing number of unruly passenger incidents.

In an emailed statement, Berry’s lawyer Jason Kreiss said the incident was “truly an aberration” in his client’s life and “he’s a really good kid from a great family who was punished for his worst day.”