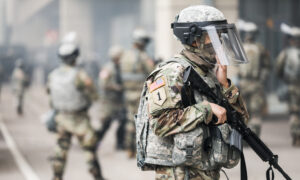 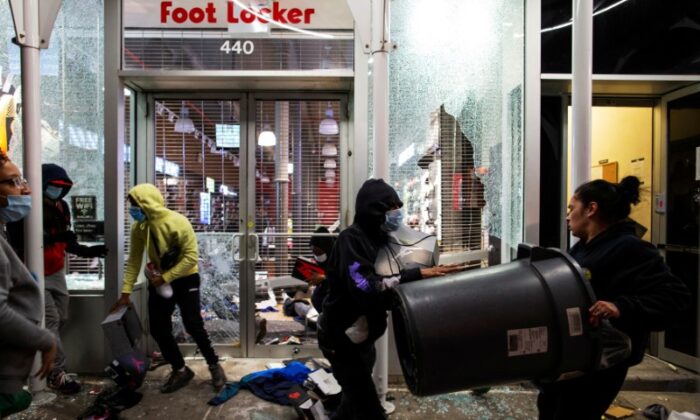 Looters target a store in the Manhattan borough of New York City on June 1, 2020. (Eduardo Munoz/Reuters)
Crime and Incidents

Anger raged across America this weekend, as an outpouring of grief over the death of George Floyd in police custody devolved into riots, looting, and violence against property and people.

Fires burned near the White House, stores were looted across the country, and disturbing footage of violent acts flooded social media, including of a mob beating an elderly female shop owner in Rochester, New York.

The unrest began with peaceful protests over the May 25 death of Floyd, a black man, who communicated trouble breathing as Derek Chauvin, a white police officer, restrained him with a knee to the neck and head area for nearly 9 minutes.

Chauvin, fired from the Minneapolis Police Department, was charged with third-degree murder and second-degree manslaughter, though that did little to stem the fury.

“I understand the pain that people are feeling. We support the right of peaceful protesters, and we hear their pleas,” said President Donald Trump, at a speech following Saturday’s launch of a rocket that sent two NASA astronauts into space.

“But what we are now seeing on the streets of our cities has nothing to do with justice or with peace,” Trump continued, saying that “the memory of George Floyd is being dishonored by rioters, looters, and anarchists.”

“The violence and vandalism is being led by Antifa and other radical left-wing groups who are terrorizing the innocent, destroying jobs, hurting businesses, and burning down buildings,” Trump said.

Among the early casualties of the riot-fueled fires was a six-story building under construction in Minneapolis, the epicenter of the violence, which was to provide nearly 200 apartments of affordable housing.

“We’re burning our own neighborhood,” said a distraught Deona Brown, a 24-year-old woman standing with a friend outside the precinct station, where a small group of protesters was shouting at a dozen or so stone-faced police officers in riot gear. “This is where we live, where we shop, and they destroyed it.”

Elsewhere in the country, a protest along the historic Route 66 into downtown Albuquerque, New Mexico, turned violent early Monday after police reported demonstrators setting small fires and officers said they were fired upon.

A Sunday afternoon of mostly peaceful protests in Boston broke at nightfall when protesters clashed with officers, throwing rocks, breaking into several stores, and lighting a police vehicle on fire.

Boston police tweeted that at least 40 people had been arrested as of 3 a.m. Monday. Police said seven police officers had been hospitalized and 21 police cruisers were damaged.

Trump, in separate remarks on Saturday ahead of his departure for Cape Canaveral, Florida, aboard Marine One, called on law enforcement to get tougher on violent protesters.

“The main victims of this horrible, horrible situation are the citizens who live in these once lovely communities. The mobs are devastating the life’s work of good people and destroying their dreams,” the president said in a speech after the launch.

Trump also said he spoke to Floyd’s family to express sorrow for his death. He added that the officers involved in the incident have been fired, one of them had been charged with murder, and that charges could be brought against the other three.

Meanwhile, protests spread around the globe, with events in London and Berlin on Sunday and others on Monday including in New Zealand, Australia, and the Netherlands.