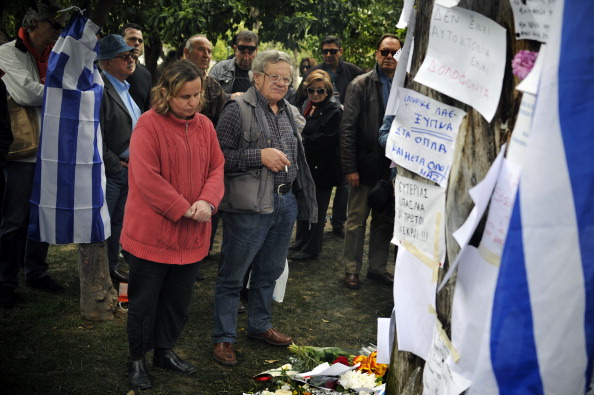 Mourners pay respect on April 5, 2012 at a spot where a retired pharmacist had shot himself at Athens central Syntagma square. (Louisa Gouliamaki/AFP/Getty Images)
Europe

Unrest After Suicide Near Greek Parliament

Greek police and protesters clashed in Athens just a few hours after a pensioner killed himself outside of the parliament building, it was reported.

Several hundred demonstrators gathered near parliament soon after on Wednesday evening, with violence erupting, the BBC reported. Some people threw molotov cocktails at police, who then shot tear gas canisters back.

The 77-year-old man who killed himself left a suicide note, which said: “The government has annihilated all traces for my survival, which was based on a very dignified pension that I alone paid for 35 years with no help from the state,” the Athens News reported.

“And since my advanced age does not allow me a way of dynamically reacting (although if a fellow Greek were to grab [an AK-47 rifle], I would be right behind him), I see no other solution than this dignified end to my life, so I don’t find myself fishing through garbage cans for my sustenance,” it continued.

A member of parliament, Yiorgos Karatzaferis, said that the suicide “should make us understand that we have all been behind this, we have all pulled the trigger” by exacting tough new austerity cuts for Greece to secure billions in bailout money from the European Union and International Monetary Fund.

Protesters posted notes and left flowers near where the man killed himself.

Lucas Papademos, the Greek prime minister, released a statement about the man’s death, calling on “citizens to support the people next to us in times of distress.”