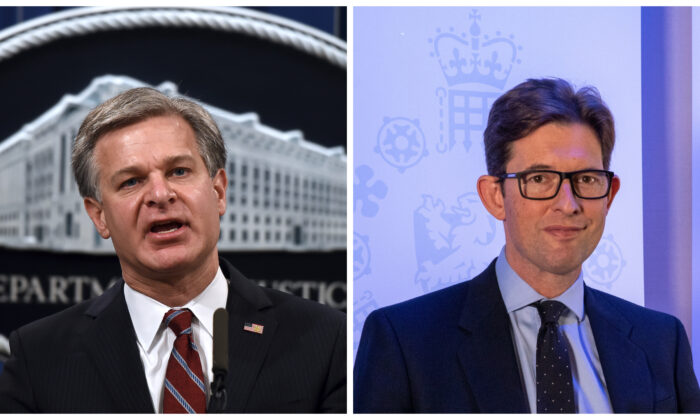 A rare joint warning delivered by the directors of the FBI and MI5 at a recent international forum was equivalent to a “break glass in case of emergency” message, said Casey Fleming, CEO of BlackOps Partners.

“The message and the detail is pivotal,” Fleming said during an interview with EpochTV’s “Crossroads.”

“Wray began making statements like this about three years ago. Then he started making more frequent warnings, but they were all basically high-level warnings. This time, the level of detail, the level of urgency and immediacy, and significance, is the equivalent of ‘break glass in case of emergency.’

“The glass is broken.”

Both intelligence directors warned that the Chinese Communist Party (CCP) is the greatest threat to the international order.

Wray said the CCP poses the “biggest long-term threat” to the economic and national security of the United States and the UK, and their allies and partners.

McCallum described the CCP’s aggression as a “massive shared challenge” for the UK and the United States, adding that the communist regime is organizing the whole of China’s state apparatus to systematically undermine the West and steal advanced technologies. He provided examples of companies compromised by the CCP’s espionage and clandestine activities in the UK and Europe.

Although both FBI and MI5 have been closely partnered for decades–the FBI office in London opened in 1942– McCallum stressed that July 6 marks the first time the heads of both agencies have delivered a speech together.

In his speech Wray described details of how the Chinese regime interfered with a congressional candidate in New York, who was a previous Tiananmen Square protester and critic of the regime, as it tried to prevent him from getting elected.

First, a former Chinese intelligence officer hired a private investigator to dig up derogatory information on the candidate, Wray said. When they could not find anything, they used a prostitute to manufacture some controversy about the candidate, and when this did not succeed, arranged for a vehicle to run the candidate down and make it look like an accident.

Wray also mentioned that American companies operating in China are required by Chinese law to install on their systems a tax software provided by the CCP; but this software also installs backdoors that allow the CCP to hack into the companies’ private networks.

How the CCP Steals Intellectual Property

“The FBI is basically warning business leaders that the CCP has been coming after you with all means necessary, both cyber as well as physical espionage, to steal your IP [intellectual property] and to put you out of business.”

The CCP takes the stolen intellectual property to China to produce the product that the American company produces and to sell it back to the company and its customers at 45 cents on the dollar because the Chinese counterpart has no research and development costs and no time cost, Fleming explained.

The CCP ordered, through Chinese companies, more than $800 million worth of windmill products and services from AMSC, then took the  first $100 million dollars of products and reverse-engineered them. But it could not run the windmills without the source code, Fleming explained. Since only seven people at AMSC had access to the source code, the CCP compromised one person using a honey trap and obtained the source code, he said. Sinovel then canceled the rest of the order in 2011, which caused AMSC stock price to tumble.

“AMSC … lost more than $1 billion in shareholder equity and almost 700 jobs, over half its global workforce,” according to the Department of Justice.

“Today, the electronic windmill or energy windmill industry is 77 percent driven by the Chinese Communist Party when it was 100 percent U.S. technology,” Fleming said.

America Is in Hybrid War With China

The Chinese covert operations started in 1986 when the CCP launched Program 863, the expert said. Program 863 is aimed at accelerating the acquisition and development of science and technology, according to a congressional report released in 1999, known as the “Cox Report” (pdf).

Fleming paraphrased the mission of the initiative: “It’s we will lie, cheat, and steal to completely take over the West … and overturn the rules-based order of the economy, and make it a Chinese communist economy globally.”

Fleming, a cybersecurity expert, compared the launch of Program 863 to cyber 9/11. “The cyber 9/11 has been happening every day since 1986 and … it’s happening in thousands and thousands of thefts, which is death by a thousand cuts.” It has almost been reached, “850 to 900 into those 1000 cuts towards death,” Fleming assessed.

The FBI and military do not use the term war in relation to hybrid war “because war means conventional war … They like to term it as the China threat,” Fleming said. But he believes that America is in a hybrid war with China.

“We’re in an absolute war. And it’s all these different factors, which are hybrid warfare, drug warfare, economic warfare, religious warfare, education warfare, telecommunications warfare, so on and so forth, over 100 different methods.”

The CCP calls the United States its enemy, and “every act that we take, every punch or kick that we make–they use that energy to use it against us, to hurt us back, And they’re doing that with everything, with our laws, with our schools, our universities,” Fleming said, and likened this tactic to Asian martial arts.

What People Can Do

Fleming suggested that first of all, people need to understand that America is at war. People are seeing gas prices going up, which started before the war on Ukraine, and the pandemic exposed supply chain issues in China, he said.

The hybrid warfare with the CCP may eventually turn into kinetic or conventional warfare, and it will probably begin around Taiwan, Fleming said, hoping that his prediction would be “absolutely wrong.”

“If you think inflation is bad now, wait till an invasion of Taiwan,” Fleming warned, alluding that inflation may become worse after that due to potential sanctions and the CCP’s response to those sanctions.

Fleming recommended voting people into office–state, local, federal–who realize that we are in this war and who will do everything to decouple from China and the CCP, as well as make policies and enact laws to counter espionage and foreign influence.